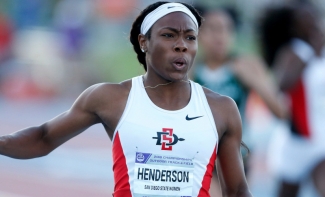 May 25, 2018 (Sacramento) - Ashley Henderson (100m) and Lisa-Anne Barrow (400m) won their heats in the quarterfinals of the NCAA West Preliminary Championships Friday evening to qualify for the NCAA Outdoor Championships in Eugene, Ore. in two weeks.

Barrow won her heat in the 400 meter dash with a personal best time of 51.86 to qualify for her first NCAA Championship. It was the first time Barrow has finished the 400 in under 52 seconds and her mark is good for the third best time in school history.

“Honestly, I was just aiming to finish in the top three,” Barrow said after the race. “So when I crossed the finish line I was surprised.”

Barrow entered the final 100 meters in third place but powered through the final stretch to finish in first and punch her ticket to Eugene.

“For this race I did my best to get out the first 300 meters and just hang on and give everything I had left in the end,” Barrow explained. “Coach [Alrick] Munroe always reminds me that I’m a lot stronger than I give myself credit for, so I just had to trust that.”

Henderson had the second best time of the night in the 100 meter dash, finishing in 11.18, to qualify for her third consecutive Outdoor Championship.

Henderson also took care of the business in the first round of the 200 meter dash, moving on to Saturday’s quarterfinals after winning her heat and finishing with the second best time overall (22.90). She will look to advance to her third straight 200 meter national outdoor championship on Saturday.

Kaitlin Heri and Marissa Berry continued the Aztecs strong pole vaulting tradition by qualifying for the West prelims, but will not move on to Eugene. Both cleared 12’ 10.75” (3.93m), finishing in 27th and 29th place respectively.

Another busy day for the Aztecs awaits on Saturday. Je’Neal Ainsworth gets things started with the triple jump at 4:30 p.m. Henderson, Glenn, Rochene Smith and Callista Fletcher will then compete in the 4x100m relay at 6:00 p.m. Henderson then will run in the 200 meter quarterfinals with a ticket to Eugene on the line at 7:50 p.m. The Aztecs will close out the meet with Barrow, Jalyn Harris, Tyra Lea and Lakin Hatcher running the 4x400 relay at 9:45 p.m.

Ashley Henderson has qualified for the NCAA Outdoor Championships in the 100 meter dash each of the past three years.

STAT OF THE MEET

San Diego State has had a representative at the NCAA Outdoor Championships in 21 of the past 22 years.

“Trusting my training has played a big part [in my recent success]. We hit a lot of big times in practice so I’ve just been trying to translate that over to my races.” Lisa-Anne Barrow