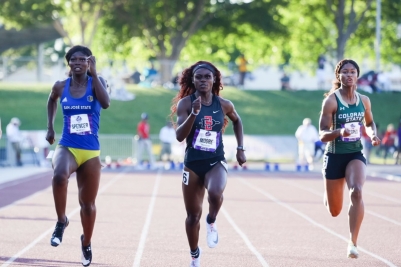 May 14, 2022 (Clovis) - Four Aztecs won individual events, and two relay teams were crowned event champions as the Aztecs were crowned Mountain West Conference Champions for the second consecutive year. Jada Moore, Simone Johnson, Danae Dyer and Kaitlin Heri all won their respective events throughout the weekend, while the Aztecs won both the 4x100m relay and the 4x400m relay on Saturday night.

“This year was a battle,” said Head Coach Shelia Burrell. “We love this meet. This is a meet that our team talks about throughout the year. Our team loves this competition. Today was a really good team effort. The 4x400 really thrives on pushing the bar every year. We used two sprinters as part of our 4x4oom team this season, and it was great to see them pull it off for the Aztecs. This title means a lot to me, I love this team because they run for me and I work for them.”

The team title came down to the final event of the evening, the 4x400m relay. The Aztecs were leading the team race by 1.50 points over Colorado State heading in to the event, 147 to 145.50. The Aztecs had Nyjari McNeil, Jalyn Harris, Aisha Watt and Sakura Roberson running. Colorado State and SDSU battled back and forth over the first three legs of the relay before Roberson took the baton with a 10-meter lead. She then widened the gap and crossed the line in 3:33.68, breaking the championship meet record that has stood since 2002, and clinched the team title for the Aztecs. That time is also the third fastest time in school history in the event.

Earlier in the day, the 4x100m relay team continued their dominance in the event. The Aztecs picked up the win in the event in 44.38, as the team of Danae Dyer, Harris, Watt, and Moore pulled away from the field over the second half of the race. Their time of 44.38 is the ninth best mark all-time in school history.

The Aztecs had their third event champion in the 100m hurdles. Dyer, who won the event last year, pulled out a repeat performance on Saturday. The senior won the event in 13.24, which is No. 6 all-time in Aztec history. Sara Absten, fresh off of her second place finish in the heptathlon on Thursday, placed fourth in 14.07, earning five points in the team category.

In the 100m dash Moore claimed her second title of the afternoon. The sophomore ran 11.39, which is the third fastest time in school history en route to the win. Harris finished in second place in 11.57 to take the silver medal, while Watt finished in fifth in 11.69 to earn crucial points in the team category.

Back at the field events, Simone Johnson followed up her bronze medal performance in the long jump yesterday, with a gold medal in the triple jump today. Johnson jumped 42-04.75 to win the event.

Earlier in the day the Aztecs had two athletes earn points in the discus throw. Felicia Crenshaw came in sixth and threw 159-03, and Erica Grotegeer threw 157-00 to finish seventh overall. The duo earned a combined five points for the team in the team category. Jenna Fee Feyerabend followed that with a fourth place showing in the high jump, the true freshman, fresh off of a third place showing in the heptathlon on Thursday, cleared 5-08.00.

The Notes: The Aztecs won three individual events and two relays on Saturday. The 4x100m relay won for the fifth time in six years, and the 4x400m relay won for the fourth time in five years. The 4x400m relay team also broke the Championship Meet Record, which had been held since 2002. The Aztecs had three individuals set top 10 all-time marks, and both relays broke into the top 10 all-time.

Up Next: The Aztecs will head to NCAA West Regionals May 27-28, which will be held in Fayetteville, Arkansas.