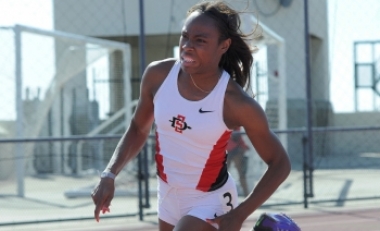 January 27, 2017 (Seattle) - San Diego State track and field junior Ashley Henderson broke a 15-year-old UW Invitational record in the 200 with a 23.57 time, the second-best mark in program history, leading the Aztecs to an outstanding opening day of the meet at Dempsey Indoor on Friday.

The previous UW Invitational record was 23.72, set by Michelle Davis of UNLV in 2002.

Reigning Mountain West Women’s Indoor Track Athlete of the Week Micha Auzenne finished third in the event with a 24.33 time, the first time she has competed in the race as a collegiate.

Junior Simone Glenn was fourth, running the 200 in 24.38, while classmate Rochene Smith placed sixth with her 24.48 time.

The Scarlet and Black’s second day of the UW Invitational begins tomorrow at 9 a.m. with the long jump and the qualifying round of the 60-meter hurdles.

Individual Results (winner and SDSU only)