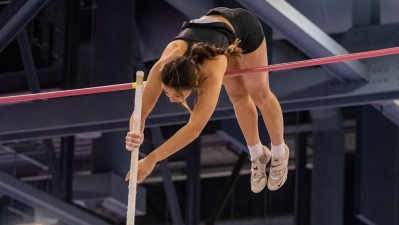 San Diego local Ashley Callahan won the competition for the Aztecs, who swept not just the top three, but the top four spots on the board. Callahan, finished in first, followed by fellow SDSU athletes Kaitlin Heri, Elizabeth Funk, and Corey Friedenbach in second through fourth in the competition.

Callahan was the only athlete to clear 13-05.75 to win the event. That mark was the second highest she’s gone this year, Callahan cleared 14 feet earlier this year at the Don Kirby Invitational. Kaitlin Heri continued her strong season, vaulting 12-11.75, good for a second place showing in the event, while Elizabeth Funk rounded out the podium placing Aztecs by clearing 12-06.00 to take third.

Corey Friedenbach rounded out the quartet of Aztecs in the top four with a vault of 12-06.00 as well but had more misses in the earlier rounds than Funk, giving Funk the third spot on the podium.

The Aztecs will be back home to host the 43rd annual Aztec Invitational from March 24-27. Spectators can purchase tickets for $5.00 per person ages 12 and above, while student tickets are free. The meet will also be streamed on RunnerSpace + ($), and a live results link will be available.