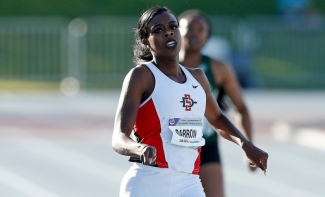 May 24, 2018 (Sacramento) - Ashley Henderson and Lisa-Anne Barrow qualified for the quarterfinals at the NCAA West Preliminary Championships in Sacramento Thursday evening. Henderson had the tenth best time in the 100 meter dash (11.36) and Barrow had the 17th best mark in the 400 (53.40) to move on to the next round.

Simone Glenn and Rochene Smith barely missed the cut in the 100 and Jalyn Harris and Tyra Lea did not advance in the 400, but all four will still be competing in their respective relay events on Saturday.

Running in what turned out to be the slowest heat, Henderson cruised to a second place finish with a wind legal time of 11.36. Her mark was the tenth fastest of the evening. This is Henderson’s third straight year advancing to the final round of the West prelims.

For Henderson and Barrow to advance to the NCAA Championships in Eugene, Ore., they will have to be finish in the top 12.

On Friday, Kaitlin Heri and Marissa Berry compete in the pole vault beginning at 4:30 p.m. Ashley Henderson will run the quarterfinals of the 100 meter dash at 6:15 p.m. with hopes of advancing to the NCAA championships in Eugene, Ore. in two weeks. Henderson will also compete alongside Simone Glenn in the first round of the 200 meter dash at 7:55 p.m.

Fans can watch a live stream of the NCAA Division I West Preliminary Championships as FloTrack Pro subscribers. The subscription will include access to all FloTrack live broadcasts, video on-demand from all events, documentaries, technique videos and more.