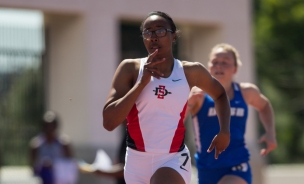 SDSU had six top 10 finishes during the day

In the 400, junior Simone Glenn took home bronze with a collegiate-best 53.91, the ninth-fastest mark in program history. Senior Tyra Lea ran the 400 in 55.33 to place ninth.

The Scarlet and Black opened the Beach Invitational with a 20th-place finish in the javelin by junior Melody Harris, and senior Freja Liljedahl took 45th in the hammer throw (172-06).

Tomorrow closes out SDSU’s week with an action-packed day at the Beach Invitational. The Aztecs are off to an early start with the long jump (Barrow, Singleton, Kira Moreland) and pole vault starting at 8:30 a.m. (Bonnie Draxler, Marissa Berry, Sara Curran, Katherine Magill, Rachel Craft).

Senior Rachel Alesi will throw the shot put at 12:20 p.m., and freshman Hannah Taylor is scheduled for the high jump at 12:30 p.m. At 1:30 p.m., three Aztecs will run the 100-meter dash (Glenn, Smith, Auzenne) and 30 minutes later, another Aztec trio will compete in the 800 (Monique McPherson, Angela Wilson, Flores). Sophomore Je’Neal Ainsworth is set for the triple jump at 3:30 p.m.

Women’s Javelin Throw (out of 64 entrants)

Women’s Hammer Throw (out of 65 entrants)