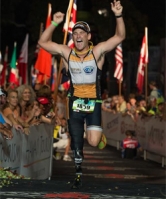 February 27, 2014 (San Diego) -- A San Diego State University staff member who lost a leg in Afghanistan has been honored by the San Diego Hall of Champions.  Erick McElvenny was named Challenged Athlete of the Year at the 68th annual Salute to the Champions awards ceremony on February 13 after a year that’s included accomplishments that would be daunting for many able-bodied athletes.

A former Marine Captain who was stationed at Camp Pendleton, he volunteered for a tour of duty in Afghanstan in 2011, where he was wounded by an improved explosive device. His leg had to be amputated below the knee. But it hasn’t slowed him down.

“I set a goal that when the other three members of my unit returned in mid-April, I’d be there to greet them — standing,”  vowed McElvenny, who did just that.

Just eight months after losing his leg, he competed in his first spring triathlon.  Two months later, he ran his first marathon.  He went on to compete in the grueling Ironman Triathlon in Hawaii last summer, which includes a 2.4 mile swim, a 112 mile bike race and a 26.2 mile marathon. Even for the fittest competitors, it’s one of the most challenging events of its kind.  McElvenny finished in 11 hours and 50 minutes.

Nowadays, he enjoys  mentoring veterans. After transitioning from battlefield to civilian life, he help s mentor student veterans. At SDSU, McElvenny is assistant director of the Troops to Engineers program. With their military backgrounds, many are finding careers in science, technology, engineering and mathematics, or STEM.

“It’s something bigger than me,” says McElvenny, who says he chose this line of work because he knows the importance of science and technology in our future.

McElvenny knows first-hand the importance of help and support.  In accepting his award, he praised the Challenged Athlete’s Foundation and the San Diego community for assisting him in attaining his dreams.  He says the award came as a surprise, while he has been focused on his training and goals.

“To have the community recognize those accomplishments was a really cool experience,” he concluded.