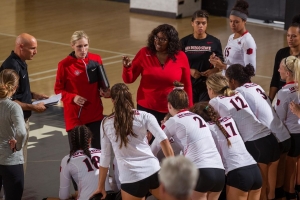 “I am happy with the non-conference schedule we have put together for the 2019-20 season,” Collins-Parker said. “The diverse level of competition will help prepare us for a competitive Mountain West season. We are looking forward to improving our overall record at home and on the road.”

The following week, SDSU will host the SDSU/USD Invitational from September 6-7 with teams playing matches at both Peterson Gym and Jenny Craig Pavilion. SDSU will play a trio of power-5 programs over that weekend, hosting West Virginia, Arkansas, and Arizona.

The Aztecs play their final tournament of the 2019 season with the GCU Invitational in Phoenix, Arizona, on September 13-14 where SDSU will face UC Riverside, Eastern Washington, and Grand Canyon.

Non-conference play wraps up with a home match against Long Beach State on September 19 followed by a crosstown matchup against San Diego on September 20.