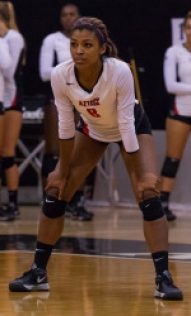 SDSU finished the night with a .049 hitting percentage compared to a .271 mark for Boise State. The Aztecs committed a total of 32 errors in the match while the home side had just 12 on the night.

The opening set was a fairly even affair to begin with as the teams were tied 10-10 over the opening third of the contest. From there, however, Boise state scored 12 of the next 14 points to take control en route to the six-point win. Psoma ad Deja Harris had three kills apiece to lead the Aztecs, but as a team the visitors had a .000 hitting percentage.

Set number two saw San Diego State with a 15-12 lead at the mid-point, but the Aztecs were unable to sustain any momentum as BSU score three straight to tie it up at 15-all. The teams went back and forth over the remainder of the contest until, with the score knotted at 23-23, a pair of SDSU hitting errors allowed the Broncos to claim the set victory. Cage and Ashlynn Dunbar had four kills each for the Aztecs, who hit .095 compared to a .367 attack mark for Boise State.

In the third set, the score was tied at 5-5 before Boise State won a pair of points to take the lead for good. The Aztecs trailed 13-10 when the Broncos scored three straight and eight of the next 10 points before going on to win the set by nine points and the match, 3-0. Psoma’s four kills were the most by an Aztec in the set, but the team hit just .045 while the Broncos compiled a .303 hitting mark.

San Diego State will now move over to Colorado Springs where it will continue Mountain West action with a match against Air Force on Saturday, Oct. 1, at 7:00 p.m. (MT) in Clune Arena.