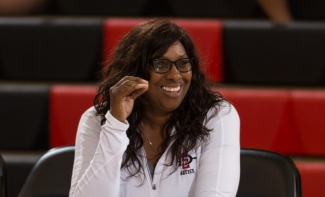 The Aztecs outhit the visitors .284-.163, maintaining a 53-47 advantage in kills and a 13.0-.7.0 spread in team blocks to help key their conquest. In addition, SDSU was the beneficiary of 16 Falcon service errors, including seven in the third set alone.

Individually, the Aztecs boasted four players with double-digit kill totals, led by Alexis Cage, who finished with 13 put-aways and hit .407 on the evening, while Hannah Turnlund (.333) launched 12 non-returnables of own. In addition, Deja Harris and Ashlynn Dunbar contributed 10 kills apiece, while setter Gabi Peoples handed out 45 assists.

The Aztecs got off to a blazing start in the opening set, outing the Academy .440-.067 on 13 kills in 25 attempts with just two errors. Little, Turnlund and Dunbar floored three consecutive swings to start the match, and SDSU never looked back. Air Force crept within four points midway through frame at 14-10, before the Scarlet and Black fashioned a 7-0 blitz to put the score out of reach. McGrath keyed the run with three service aces, while Turnlund, Cage and Harris provided kills.

Set number two was the most entertaining of the night as the two sides combined for a whopping 19 ties and 11 lead changes. Turnlund blasted six of the Aztecs 17 kills in the stanza, while Dunbar and Harris chipped in four apiece. The Falcons built a pair of six-point leads, including a 14-8 spread following a kill by Piper Heineck. However, the Aztecs crept back into contention with a 9-2 spurt to nudge in front 17-16, setting the stage for a wild finish.

Air Force appeared in control as a Heineck ace gave the Falcons a 24-21 advantage, but SDSU quickly regrouped with four consecutive tallies to go back in front 25-24. The Aztecs were unable to seal the deal, however, falling short on four set points, including a 29-28 spread following a block by Peoples and Harris. The Falcons caught lightning in a bottle at the end, closing with three straight points on a Heineck kill, an errant SDSU attack and a block by Heineck and Denise Ssozi.

Stung, the Aztecs found themselves trailing early in the third frame 2-1 before responding with a timely 9-2 run to seize control. The host school received three blocks and two kills by Cage during the run, while Air Force imploded with two attack errors, a wayward serve and a bad set, which gave SDSU a 10-4 lead.

The Aztecs gradually upped their advantage to 22-14, before the Falcons trimmed the margin in half at 24-20 following a kill by Abigail Miksch.  However, the rally came too little too late as Cage slammed the door with a put-away on the very next serve.

SDSU never trailed in the fourth stanza, but Air Force kept things close, trimming the margin to 10-9 after two consecutive attack errors. However, the Aztecs maintained their composure, stringing together another crucial 9-2 spurt to give themselves some breathing room. Peoples and Little combined for a pair of blocks during the run, while Cage added three kills.

Cage also provided two more put-aways down the stretch, while the match fittingly concluded on a Falcon service error. SDSU hit .379 in the set, knocking down 15 kills on 29 swings with four errors.

Air Force was paced by Miksch, who finished with a match-high 17 kills, while Ssozi (11) and Heineck also reached double figures in that statistic.

San Diego State hits the road next week for a pair of conference matches at New Mexico (Oct. 12) and UNLV (Oct. 14).