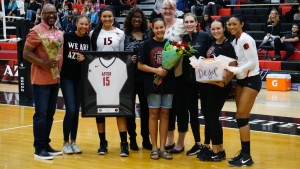 Harris finished her Senior Day with a match-best 16 kills to go along with a .520 hitting percentage.

Harris,Tamia Reeves, and Victoria O'Sullivan each recorded three kills in a 25-20 first set win. The Aztecs found themselves in an early hole against the Spartans, as SJSU jumped out to a 6-0 lead to begin the match. The Aztecs slowly chipped away at the early deficit before tying the set at 17-17 before ending the set on an 8-3 win to jump out to a 1-0 advantage.

With the match tied at 1-1, SDSU held match point late in the set after Erin Gillcrist gave the Aztecs a 26-25 lead on her fourth kill of the night, but unfortunatley for SDSU, the Spartans rattled off three consecutive points on kills from Haylee Nelson and Caitlin Bettenay to take a 2-1 edge.

SDSU put on its most dominant performance on the night in the fourth set, limiting SJSU to a -.028 hitting percentage. Unfortunately for SDSU, SJSU responded to its offensive struggles in the fourth set with a .478 in the fifth set.

The Aztecs showed their resiliency despite facing a 11-7 hole in the fifth, going on a 5-1 run to cut SJSU's lead to just 13-11 after Harris' third kill of the fifth set. SJSU ended SDSU's chances at a last-second comeback despite Harris' best efforts, winning the fifth, 15-12.