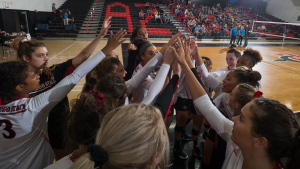 The Aztecs (1-4) started the first set with a 16-14 lead, but a 5-0 spurt for the Wildcats (5-0) handed Arizona a 19-16 advantage it did not relinquish. The Aztecs were able to later tie the game at 21-21 after an Arizona attack error, but a pair of late-set Arizona kills ultimately solidified the first set at 25-22.

Again, SDSU started the third set off with an early-set lead, holding a 9-8 advantage before forcing a Wildcat timeout. After the timeout, Arizona used a 6-0 run to take control of the third set to take a game-defining 15-9 lead. Arizona ultimately clinched the match with a 25-17 win with Ashlynn Dunbar posting a team-high four kills in the third set.

Dunbar finished the match with a team-high nine kills, while Turnlund finished just behind with eight. Delaney Taylor totaled 21 assists on the night while Sam McGrath led SDSU with 10 digs.

SDSU will conclude the Cactus Classic Saturday morning, facing Lipscomb at the McKale Center at 10:00 a.m.