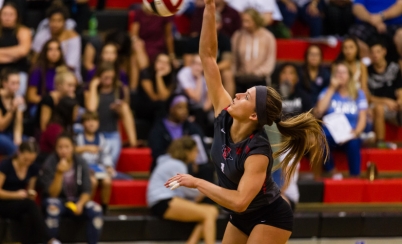 SDSU (0-1) had three players post double-digit kill totals, including Alexandra Psoma, who led the team with 15 put-aways, while Hannah Turnlund blasted 12 of her own, followed by Alexis Cage, who finished with 11 for the evening. In addition, the Aztec cause was aided by Indigo Thompson’s 44 assists, while Devyn Pritchard scooped up a match-high 15 digs.

However, SDSU was unable to keep pace with the Colonels (1-0), who hit .387 in the first two sets, including a .433 clip (15-2-30) in the second stanza to build a commanding 2-0 advantage. Conversely during that stretch, the Aztecs hit just .219, unable to overcome a plague of 12 hitting errors and four errant serves.

Still, SDSU was engaged in a tight affair during an opening set that featured nine ties and six lead changes. A kill by Psoma put the host school up 19-18, before EKU responded with a 7-1 run to close out the frame, punctuated by a Ciera Koons service ace.

The two sides were deadlocked at 5-5 in set number two, until the Colonels tallied three straight points on consecutive blocks and a service ace to take the lead for good. The visitors managed to build a five-point cushion on two occasions, including a 21-16 spread following a Kaylin Johnson kill and an Aztec attack error. SDSU cut the margin to two at 22-20 on a block by Turnlund and Deja Harris, but could not draw closer as the Colonels kept the host school at bay with a 3-1 spurt.

The Aztecs came to life in the third set, hitting .297 on 14 kills with just three errors while limiting EKU to a -.028 attack percentage on eight kills with nine errors in 36 attempts. After a 5-5 tie, SDSU unleashed a 20-10 blitz, highlighted by six Psoma kills and a pair of Pritchard service aces.

However, the Scarlet and Black was unable to sustain the momentum in the fourth frame, as the Colonels benefited from an errant Aztec serve and a ball handling error to leap in front to stay 6-4. SDSU remained within striking distance at 14-12, following an Ashlynn Dunbar kill, but consecutive put-aways by Nikki Drost ignited an 11-3 run by the Colonels.

San Diego State closes out the Aztec Invitational on Saturday when it faces Portland State (11:30 a.m.) and CSUN (7:30  p.m. ) Both matches will be streamed live via the Mountain West Network on GoAztecs.com.