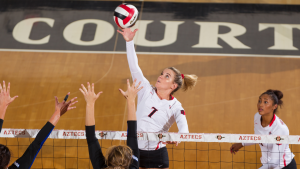 Hannah Turnlund had 24 kills and 16 digs

SDSU was led by Hannah Turnlund’s 24 kills and 16 digs. Victoria O’Sullivan had 18 kills and Tamia Reeves chipped in 10. Camryn Machado had 55 assists and 20 digs while Loren Teter added 24 digs

In the first set, SDSU held an early 8-5 lead, but the Eagles went on a mini run to tie it at 9-9.  SDSU held on to the lead until FGCU went ahead 16-15. The Aztecs tied the match at 19-all and then were able to close out the first set on a 6-3 run to win their seventh consecutive set. SDSU had just nine kills in the opening set but held the Eagle to a .111 hitting percentage.

The third set was tight throughout and featured eight ties. After falling behind 9-5, the Aztecs reeled off an 8-1 run to open up a 13-10 lead. After the Eagles tied it up at 16, the teams traded points until it was 23-all, but FGCU was able to take the last two points to go up 2-1.

Hannah Turnlund had 24 kills and 16 digs.

The Aztecs return to San Diego next weekend when they co-host a tournament with USD. They open with West Virginia Friday evening at 6:00 p.m.  The match will be streamed on the Mountain West Network.