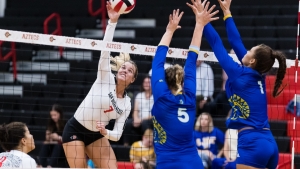 Aztecs outside hitter Hannah Turnlund surpasses 1,000 kills for her career

SDSU captured the second and third sets, hitting at a .442 clip during that span with only four attack errors (27-4-52). However, the Scarlet and Black posted a mere .080 hitting percentage in the other three frames, combining for just 21 kills (21-14-88).

Consequently, the Aztecs lost for the first time this year when holding a 2-1 lead in sets (6-1) and when limiting the opposition to a .200 attack percentage or lower (6-1).

Individually, the Aztecs were paced by Hannah Turnlund, who floored 11 shots against the Falcons to surpass the 1,000-kill plateau for her career (1,005). In addition, Erin Gillcrist and Victoria O’Sullivan recorded 10 put-aways each, while Camryn Machado completed her 10th double-double of the year with 41 assists and 10 digs.

Gillcrist hit .476 on the afternoon, committing no errors on 21 attempts, while Andrea Walker logged career-highs of nine kills and seven block assists.

Not to be outdone, Loren Teter led all players with 20 digs, her third-best total of the year thus far, while Lauren Lee and Sam McGrath finished with seven scoops apiece.

Trailing 2-1 in sets, Air Force finished with an 18-7 advantage in kills during the fourth frame, including seven by Cambria Galloway and six by Denise Ssozi, to keep their comeback hopes alive. Still, SDSU forged a slim 18-17 lead on Tamia Reeves solo block before the Falcons went ahead to stay on kills by Galloway and Ssozi sandwiched around an Andi Ahlers service ace.

Looking down the barrel of a 20-18 deficit, the Aztecs narrowed the gap to one on three occasions, including a 23-22 spread following an errant Air Force serve. However, the Scarlet and Black was unable to regain the upper hand, as the Falcons forced a decisive fifth set after Bailey Keith and Vittoria Juarez provided the clinching kills, respectively.

Unfazed, SDSU jumped out to a 6-3 lead in the final frame, benefiting from consecutive Air Force attack errors, while Walker launched a pair of non-returnables. However, the Falcons seized momentum with a timely 9-3 run and were never headed the rest of the way. Ahlers and Jordan Daniels each served up an ace during that span, while Galloway notched a pair of kills to go with a Taleah Cooper solo block.

Suddenly trailing 12-9, the Aztecs could draw no closer than two points the rest of the way, including a 13-11 margin on Turnlund’s final kill of the match. However, Air Force withstood the challenge, as Ssozi recorded a put-away, while Ahlers and Galloway combined on a block to help the host school escape.

The Falcons had three players reach double figures in kills, including Ssozi, who recorded a double-double with 19 non-returnables and 11 digs, followed by Galloway (13, .385) and Keith (12).  In addition, Ahlers dished out 50 assists to go with nine digs and three total blocks in the win.

SDSU found itself on the wrong side of 12-10 score in the opening set before Air Force turned on the afterburners with a 12-3 run to secure the frame. Ssozi collected three kills during that stretch, while the Aztecs were victimized by a trio of aces, including two by Kelly Motes.

With the score tied at 4-4 in the second stanza, SDSU netted three straight points on a Gillcrist kill followed by a pair of Turnlund blocks, with Reeves assisting on the first stuff. The Aztecs methodically pulled away at this juncture, building an insurmountable 22-10 lead on another Gillcrist put-away.

SDSU was never fronted in the third set, as Turnlund powered down five kills in the frame, while Walker and O’Sullivan totaled three each. Nursing a 7-5 lead, the Aztecs gave themselves some separation with a 7-1 surge, punctuated by a combined block from Gillcrist and Walker.

However, the Scarlet and Black could not sustain the momentum in the fourth set, where the Falcons started their gradual comeback.

San Diego State opens a two-match homestand next weekend when it plays host to Boise State on Thursday, Oct. 24 before Utah State invades The Mesa on Saturday, Oct. 26.