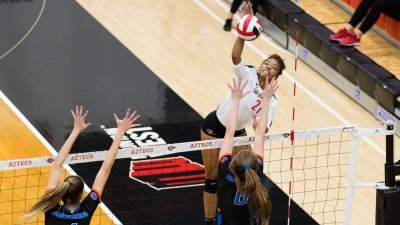 Aztec senior Victoria O’Sullivan blasts a match-high 23 kills
Source:  goaztecs.com
Photo courtesy goaztecs.com
November 6, 2021 (Fresno) -  Playing its second straight five-set match and sixth of the season, the San Diego State volleyball found itself in another tight battle with Fresno State on Saturday before dropping a narrow 3-2 decision (16-25, 25-17, 24-26, 25-22, 8-15) in a Mountain West clash at Save Mart Center.

O’Sullivan’s 23 kills tied her second-best career total, as the SDSU senior committed just six errors in 48 attempts for a .354 hitting percentage. With her effort, O’Sullivan needs just 27 put-aways over the final four matches of the regular season to reach 1,000 kills for her career.

The Aztecs also received a boost from Zoi Faki, who recorded her third double-double of the year with 10 kills and 12 digs, while Andrea Walker launched eight non-returnables of her own and hit .313 on the day.

Elsewhere, Heipua Tautua’a logged another all-round performance with eight kills, 10 digs and a pair of service aces, while Ashley Vanderpan dished out a season-high 37 assists and tied her collegiate best with three aces. Faki also matched her career high with a trio of aces, while Natalie Smith led all players with 14 digs. Not to outdone, Julia Haynie (5 kills) contributed to the SDSU defensive efforts with a match-high five blocks, including a pair of solo stuffs.

After hitting just .065 in the opening set, the Aztecs stormed back in the second stanza to post a .407 efficiency on 15 kills against just four errors in 27 attempts. SDSU featured a balanced attack in the set, as O’Sullivan, Faki, Haynie  and Tautua’a powered down three kills apiece.

Trailing 7-6, the Aztecs scored five straight points to take the lead for good. Vanderpan capped the run with consecutive aces, while Haynie combined with Tautua’a and O’Sullivan on a pair of blocks, respectively. The Bulldogs crept to within three at 16-13 following a kill by Mikayla Weiss. However, SDSU extinguished the threat with a 6-1 blitz to give itself an insurmountable 22-14 advantage. The Aztecs benefited from two Fresno State attack errors and a wayward serve, while O’Sullivan and Haynie provided kills, along with a Natalie Smith service ace.

Neither side hit particularly well in the third set, with the Bulldogs maintaining a slight edge (.189 to .184) in that category. O’Sullivan accounted for seven of SDSU’s kills in the frame, while Faki served up two aces, with Reagan Merk added another. However, Fresno State countered with five aces of its own and came through with a pair of blocks, which proved to be the difference.

The Bulldogs cruised to a seemingly comfortable 17-4 lead, as Grace Doyle combined with Savanah Smith on a block, while Ella Rud and Rebecca Reindahl joined forces on another. In addition, the host school was gifted six points on four Aztec attack errors and two off-target serves, while Doyle served up two aces and Sydney Gazzaniga contributed another.

Left for dead, SDSU climbed out of its deep hole to twice tie the score, including a 24-24 deadlock following an O’Sullivan kill, which punctuated a 20-7 surge. O’Sullivan keyed the run with five previous kills, while Tautua’a floored three shots during that stretch. Not to be outdone, Faki tallied two consecutive service aces. However, Fresno State kept the Aztecs at bay with a Savanah Smith kill and a service ace by Rud.

Inspired by its near-miss, SDSU posted its highest kill total in the fourth set, as O’Sullivan provided seven of the visitors’ 16 put-aways, while Faki powered down three non-returnables and added an ace, along with Tautua’a and Vanderpan. The teams slugged it out through 11 ties, including an 18-18 score following a Mikela Labno kill and a Bulldog attack error. Moments later, Fresno State responded with another put-away from Savanah Smith and were the beneficiaries of two errant Aztec attacks, which gave the hosts a late 21-18 lead.

Down but not out, SDSU quickly turned the tables with a 7-1 spurt to stun the Bulldogs. O’Sullivan launched a pair of kills during that span, while Tautua’a served up an ace. Shortly thereafter, Haynie sent the match to a deciding fifth set with a solo block.

However, the Aztecs could not sustain the momentum in the final frame, knocking down just five kills, while Fresno State recorded eight put-aways and committed just one error in the frame for a .583 hitting percentage. The Bulldogs led throughout, building a 10-4 advantage following a combined block by Kasey Purry and Preslee Lillard, along with a Brooke Cowie ace. Kills by Walker, Labno and O’Sullivan helped trim the margin to 12-8, but SDSU could draw no closer.

Fresno State was paced by Doyle, who finished with 13 kills, three aces and four block assists to go with a .522 hitting percentage thanks to one attack error. In addition, the Bulldogs received a double-double from Desiree Sukhov, who totaled 12 kills and 11 digs, while Savanah Smith (11 kills, 4 block assists and Rud (10 kills, 3 aces) recorded double-digit put-aways in the victory.

San Diego State will be back in action on Thursday, Nov. 11 when it travels to the Front Range of the Rockies to face Air Force starting at 6 p.m. MT/5 p.m. PT.