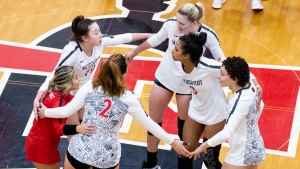 The Aztecs had their highest hit percentage in the first set (.226), knocking down 12 kills on 31 swings with five miscues, but saw Nevada record a .381 hit percentage with just three errors.

SDSU fell behind 4-1 early in the first set and trailed until taking a 15-14 lead. Nevada then responded with a 6-1 run and wouldn’t relinquish the lead again.

In the second set, the Aztecs dug themselves into a hole, falling behind 11-3 and 16-6 before going on a 10-3 run to bring the score to 19-16 Nevada. SDSU pulled within one point, trailing 23-22 before the Wolf Pack were able to score the final two points.

The Aztecs will be back in action next weekend when they play at Wyoming Friday and Saturday.