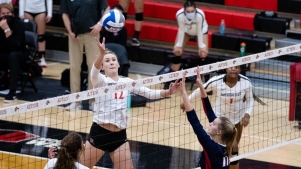 SDSU’s Heipua Tautua’a tied for match-high honors with 15 kills, while Victoria O’Sullivan added 13 put-aways of her own, followed by Erin Gillcrist, who hit .500 for the night after launching 10 non-returnables on 18 attempts with just one error.

In addition, Lauren Lee led all players with 14 digs, while Ashley Vanderpan notched her second double-double of the year with 34 assists and 12 digs. Gillcrist was also a force at the net, recording a team-high four blocks, including a solo stuff.

However, the Aztecs were unable to maintain the momentum after claiming the first set. SDSU hit .286 during the frame, knocking down 18 kills on 42 swings with six miscues. The Aztecs mustered a .155 attack percentage the rest of the way, while the Wolf Pack (2-5, 2-5 MW) recorded a .356 clip over the final three sets, including a .500 pace (16-1-30) in the final stanza.

With the scoreboard knotted at 1-1 in sets, SDSU battled through the third frame, forging four ties, including an 18-18 deadlock following an Abby Pugh kill. However, Nevada scored tallied three straight points to spark a 7-2 closing run. Sydney Peterson ignited the outburst with a kill and promptly combined with Reka Monteleone and Kassie McGill on a pair of blocks to give the visitors the lead it would not relinquish.

Stung, the Aztecs were unable to the upper hand in the fourth set, as the Wolf Pack led throughout. Peterson was a perfect 5-for-5 on attack attempts during the frame, while Monteleone and Alyssa Zuro floored four shots each to keep the Aztecs at bay.

Monteleone (.433) had 15 kills to lead Nevada, while Peterson (.417) launched 13 put-aways and contributed six block assists. Brianna Souza also totaled double-digit kills with 10, while Andrea Alcaraz logged a double-double with 44 assists and 11 digs in the victory.

The Aztecs and Wolf Pack conclude their weekend series on Saturday starting at noon. The match will be streamed live on the Mountain West Network.