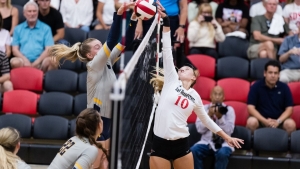 Three players reached the double-digit kill plateau, helping SDSU raise its record to 7-3 overall, which matches the program’s best start since the 2012 campaign.

Hannah Turnlund led the Aztec attack with 17 kills, while Victoria O’Sullivan registered 14 put-aways of her own, followed by Erin Gillcrist’s season-high 10. Gillcrist and Tamia Reeves (7 kills) each hit .500 for the match, combining for just three errors, while Lexie Hamrick finished with a .400 clip, blasting eight kills with just two miscues in eight swings.

Also advancing the Scarlet and Black cause was Camryn Machado, who logged her seventh double-double of the year with 50 assists and 10 digs, while Lauren Teter was solid along the back row once again, scooping up a match-high 16 digs. Not to be outdone, Machado and Hamrick totaled six blocks apiece to aid the Aztec defense at the net.

The Aztecs took control in the opening set, capitalizing on nine attack errors by the Beach (3-7) while committing just one miscue themselves. Leading 12-6 after a Turnlund kill, SDSU saw its advantage trimmed in half to 14-11 thanks to a service ace by LBSU’s Kashauna Williams.

The Aztecs quickly extinguished the threat, unleashing an 11-1 blitz to close out the frame. Hamrick keyed the run with three kills, including the clinching shot, while Turnlund added two non-returnables to go with an ace. In all, SDSU hit .435 for the set while limiting the Beach to a .000 attack percentage.

Set two was a much closer affair, with the two teams combining for six ties and four lead changes. Still, the Aztecs gave themselves some separation, build a pair of six-point leads, including a seemingly comfortable 18-12 cushion following a combined block by Hamrick and Machado.

LBSU fought itself off the ropes with a 6-0 surge capped by a Williams kill and a Jade Waskom ace, which knotted the score at 18-18. The visitors could not grab the upper hand, however, as an errant attack and an O’Sullivan solo block put the Scarlet and Black in front for good, sparking a timely 7-1 finishing run.

Despite hitting just .128 in the third set, SDSU put itself in position for a sweep, fashioning a pair of four-point leads, including an 18-14 spread thanks to another O’Sullivan kill. However, the Beach defense tightened down the stretch, posting four blocks in an 11-3 spurt while benefiting from three errant Aztec attacks and a serving mishap.

Stung, San Diego State trailed 3-1early in the fourth stanza before reeling off five straight points to bolt in front for good.  After upping their advantage to 15-9 following a Reeves kill, the Aztecs would not allow LBSU to draw any closer than four points the rest of the way.  Turnlund (8) and Gillcrist (5) combined for 13 of the team’s 20 kills in the set, hitting .600 between the two, which all but vanquished any hopes of a Beach comeback.

Long Beach State was led by Williams’ match-high 19 kills, while Katie Kennedy added nine put-aways of her own. In addition, YiZhi Xue (8 kills) and Kjersti Norveel registered four block assists each, while Hailey Harward totaled nine digs in the loss.

San Diego State will have little time to savor its victory before battling crosstown foe San Diego in its final non-conference match on Friday, Sept. 20 inside Jenny Craig Pavilion. First serve on the Toreros’ home floor is set for 7 p.m.