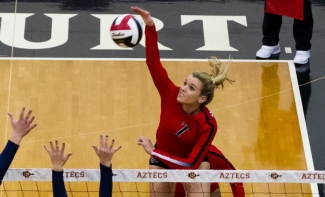 Individually, SDSU’s balanced offensive production featured five players totaling at least six kills. Alexis Cage topped the list with 12 put-aways  on the afternoon, while Hannah Turnlund blasted 11 non-returnables of her own. The Aztecs’ fortunes were also buoyed by Deja Harris, who registered nine kills and hit .500 for the match while contributing three blocks and two solo stops.

Baylee Little also got into the act with seven kills and a team-high four blocks (one solo), while libero Devyn Pritchard scooped up a match-best 17 digs. Not to be outdone, SDSU received a six-kill, 11-dig performance from Ashlynn Dunbar, while Gabi Peoples continued her stellar play of late with 40 assists to lead all players.

Collectively, the Aztecs maintained the statistical advantage in most categories, including kills (46-35), hitting percentage (.271 to .162), digs (47-36) and team blocks (7.0-6.0). In addition, the Scarlet and Black benefited from eight errant serves to help avenge a loss to the Spartans at home last month.

SDSU found itself on the wrong side of a 3-1 score in the opening set, before unleashing a 10-3 blitz to seize control. Cage knocked down two kills during the run, while the Aztecs capitalized on three errant SJSU attacks and two ball-handling errors.

Leading 11-6 at this juncture, SDSU kept the Spartans at bay for the remainder of the set, not allowing the host school to pull any closer than three points. When SJSU trimmed the margin to 19-16 after a dump shot by Breann Robinson, the Aztecs closed things off with a 6-4 spurt, as Harris provided the clincher with a thunderous kill. In all, SDSU posted its best attack percentage of the match, hitting .355 during the frame on 14 kills in 35 attempts with just three errors.

Trailing 7-5 in the second stanza, the Aztecs crafted another timely 9-2 run to steal the momentum. Harris once again came up big with two kills and pair of solo blocks during that stretch, while Turnlund floored two shots of her own.

SDSU stretched the margin to six on three occasions, including a 21-15 spread following a combined block by Little and Cage.  The Spartans tightened the score with four straight points, as Thaliana Grajeda and Laura Parts teamed up for a block of their own, prompting an Aztec timeout. However, SDSU squelched the hosts comeback attempts with a quick 4-0 run, with Turnlund’s kill providing the clinching tally.

Set number three was the most fiercely contested of the day, with the two sides combining for nine ties and three lead changes. In fact, the teams exchanged points on 11 consecutive serves during one stretch. With the score deadlocked at 20-20, the Aztecs displayed their finishing kick, fashioning an impressive 5-1 run to complete their fifth sweep of the season. Cage blasted two kills down the stretch and combined with Little on another block to help secure the match.

SJSU’s Fernanda Vido led all players with 14 kills, while Nandyala Gama added 10 in the loss. In addition, Jamie Hirai topped the Spartans with nine digs, while Robinson finished with 27 assists.

San Diego State will return home for an encounter with Fresno State on Halloween night starting at 6 p.m. PT on Aztec Court. SDSU will then hit the road for a date with Air Force on Sunday, Nov. 5 beginning at noon PT.