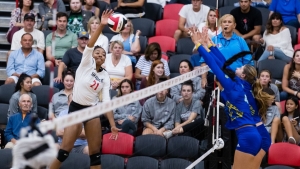 September 26, 2019 (San Diego) - San Diego State’s Victoria Sullivan blasted a match-high 20 kills, while Hannah Turnlund finished with 19 put-aways of her own to lead the Aztecs to a thrilling five-set victory over visiting San José State in the Mountain West opener for both teams Thursday inside Aztec Court at Peterson Gym.

SDSU also received double-digit kills from Lexie Hamrick (11) and Tamia Reeves (10) to help raise its record to 8-4 on the year and 1-0 in conference play, while the Spartans fall to 5-7 overall and 0-1 in the MW.

Hamrick hit .348 on the night, while O’Sullivan finished with a .310 clip, as the two players combined for just 10 errors in 65 attempts.

In addition, the Aztecs were bolstered by setter Camryn Machado’s eighth double-double of the year on 56 assists and 16 digs, while Loren Teter led all players with 22 scoops of her own.

However, SDSU hit just .171 as a team, including a .113 clip over the final four sets. After committing two attack errors in the opening frame, the Aztecs were plagued by 35 miscues over the remainder of the contest, allowing the Spartans to climb back into contention.

The Aztecs came out firing on all cylinders in the first set, out-hitting SJSU .452 to .067, with the triumvirate of Reeves, Hamrick and Erin Gillcrist leading a balanced attack with four kills each. SDSU set the tone with an 8-1 opening blitz and was never threatened, capitalized on seven Spartan attack errors, an errant serve and a bad set.

The Scarlet and Black maintained the upper hand throughout most of the second stanza as well, leading by as many as seven points after an SJSU hitting error provided the host school with a seemingly comfortable 14-7 advantage. The Spartans eventually fought themselves off the ropes, however, fashioning a 16-9 run to tie the score at 23-23.  The Aztecs were hampered by three blocks during that stretch, including a solo stop by Thaliana Grajeda, who also served up an ace, while Caitlin Bettenay and Haylee Nelson each added a pair of kills.

However, SDSU stood its ground as Gillcrist and Turnlund launched consecutive non-returnables to keep the visitors at bay. Turnlund posted five kills in the set, while O’Sullivan finished with three.

San José State began its gradual rise from the ashes in the third set, where it posted a .414 hitting percentage, knocking down 14 kills with just two errors on 29 swings, while the Aztecs registered a .265 pace (16-7-34). Despite the deficiency, SDSU forged a 20-20 tie following a Turnlund kill before the Spartans closed with a 5-1 run, punctuated by a Tabea Schwarz put-away.

Despite holding a slim 14-12 margin in kills during a dramatic fourth set, the Aztecs were beset by 14 attack errors, as the two sides combined for 14 ties and eight lead changes during the frame. SDSU trailed by as many as three points, including a 13-10 spread following a Nelson kill. The Aztecs kept things close and eventually arrived at match point after a combined block by Turnlund and Hamrick. However, San Diego State imploded at this juncture, suffering a service mishap and an attack error sandwiched around a block by Nelson and Grajeda.

The fifth set was no less heart-stopping, with the teams witnessing nine additional ties and four more lead changes. Trailing 10-9, the Aztecs reeled off four straight points, benefiting from a wayward Spartan serve and attack error, while O’Sullivan and Hamrick each floored a ball.

Clinging to a 14-13 lead moments later, SDSU appeared to have finally secured the match on a Machado kill, but SJSU head coach Jolene Shepardson challenged the call and the Spartans were awarded the point.

With the score tied 14-14, the Aztecs received a gift on an SJSU service error, while O’Sullivan quickly followed with a kill to put an end to the marathon affair.

San Diego State hits the road for its next conference match when it travels to the Silver State to battle Nevada on Saturday, Sept. 28. First serve is set for 1 p.m. PT.