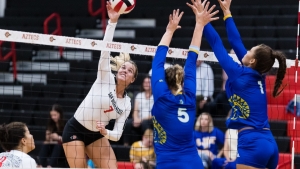 October 15, 2019 (Fresno) - Despite a match-high 19 kills from Hannah Turnlund, the San Diego State volleyball team experienced its third straight defeat Monday after dropping a 3-0 decision to Fresno State (24-26, 22-25, 19-25) in a Mountain West clash at Save Mart Center.

Playing their third match in the last five days, the Aztecs knocked down almost as many kills as the Bulldogs (46-44) and maintained a sizeable advantage in digs (43-29). However, SDSU was plagued by eight more attack errors (18-9) and finished with far fewer team blocks (9.5-2.0) in the loss.

Consequently, Fresno State recorded a greater hitting percentage (.349 to .274) to help raise its record to 11-8 overall and 3-3 in conference play, while the Aztecs fall to 9-9 on the season and 2-5 in the MW.

In addition to Turnlund, who posted her second-best attack percentage of the year (.361), Victoria O’Sullivan (.318) launched nine kills of her own, while Andrea Walker and Tamia Reeves both hit .444 on the night with five put-aways each. SDSU also received double-digit digs from Loren Teter (12) and Lauren Lee (11), while Camryn Machado handed out 22 assists.

The Aztecs came out firing on all cylinders in the opening frame, building a trio of seven-point leads, including a 16-9 advantage following a kill by Erin Gillcrist. However, the Bulldogs stormed back with a pivotal 12-6 run, pulling to within 22-21 after a Desiree Sukhov service ace. Amaria Kelley and Amilya Thompson provided two kills each during that stretch, while SDSU shot itself in the proverbial foot with two errant attacks and a wayward serve.

Still, the Aztecs appeared poised to withstand the threat after an O’Sullivan kill and a Machado service ace put the visitors at set point, 24-21. Incredibly, Fresno State reeled off five consecutive points to steal the set. After an SDSU ball-handling error, the Bulldogs’ Grace Doyle recorded aces on three of her next four serves, including the clincher following a combined block by Rebecca Rendahl and Montez Uigaese.

The two sides battled through eight ties and five lead changes early in the second stanza before Fresno State vaulted in front for good with five straight points to erase an 8-7 deficit. Thompson floored two shots during the run, while Kelley and Rendahl teamed up on a block.

Forced to play catch-up, SDSU twice trimmed the margin to two points, but was never able to regain the upper hand. Trailing 24-20, O’Sullivan blasted two kills to draw the Aztecs closer; however, Doyle extinguished the Scarlet and Black’s faint comeback hopes with a put-away on the ensuing serve.

Save for two ties, the Bulldogs led throughout much of the third set, forging a pair of four-point leads, including a 15-11 bulge following a Sukhov kill. SDSU narrowed the gap to 18-17 on consecutive put-aways by O’Sullivan and Turnlund. However, Fresno State displayed its finishing kick with a timely 7-2 closing run, as Doyle and Kelley aptly secured the match with a block on the final point.

The Bulldogs were led by Thompson’s 11 kills, while Doyle (.625) finished with 10 non-returnables to go with five block assists.

San Diego State wraps up its road swing next weekend when it returns to the Front Range of the Rockies to face Air Force on Saturday, Oct. 19, starting at 1 p.m. MT/noon PT.