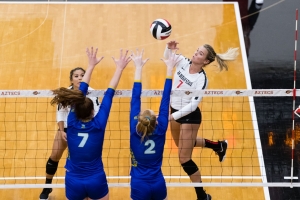 With the setback, the Aztecs saw their eight-match winning streak snapped vs. the Wolf Pack, slipping to 8-5 on the year and 1-1 in conference play. In addition, SDSU remains winless in four true road matches this season. Meanwhile, Nevada improves to 11-3 overall and 1-1 in the MW.

The Aztecs were paced by Hannah Turnlund and Victoria O’Sullivan, who launched 14 kills apiece, while Lexie Hamrick floored six shots of her own and finished with a .286 hitting percentage. In addition, Tamia Reeves (6 kills) led all players with seven total blocks, including a solo stop, while and Erin Gillcrist recorded six put-aways as well to go with six block assists.

The SDSU fortunes were also buoyed by Camryn Machado, who completed her ninth double-double of the year with 44 assists and 11 digs, while Maddie Lenn totaled eight digs on the afternoon.

SDSU trailed by as many as eight points in the first set before trimming the deficit to 23-22 following a Gillcrist kill. However, Nevada managed to escape, thanks to a Sydney Peterson put-away and a Mandalay Rennon service ace.

The Aztecs opened with a 2-1 lead in the second stanza, but the Wolf Pack responded with six straight points to vault in front for good. Kaila Spevak keyed the run with a pair of service aces, while Kayla Afoa knocked down a ball and combined with Brianna Souza on a block. SDSU finished with just nine kills in the frame while totaling 10 attack errors, as Nevada coasted after building a pair of 10-point leads.

The third set marked the only time the Aztecs held an advantage in attack percentage for the match (.281 to .167), as the Scarlet and Black used a 16-7 surge to erase a 13-9 deficit and stay alive. O’Sullivan sparked the run with four kills, while Turnlund added a pair of non-returnable during that stretch.

However, SDSU’s comeback hopes were dashed in the fourth set after Nevada utilized a timely 11-5 outburst to break a 7-7 deadlock. Afoa powered down three kills in that span, while Spevak drilled two more aces to give the host school a commanding 18-12 lead, and the Aztecs never threatened again.

The Wolf Pack was led by Afoa’s 19-kill performance, while Kili Robins finished in double figures with 12 put-aways of her own. In addition, Peterson had nine kills and hit .353 for the match to go six block assists, while Ryan Blackwood topped all players with 15 digs.

San Diego State will return home for a pair of Mountain West matches next week when it plays host to UNLV on Thursday, Oct. 3, followed by a clash with New Mexico on Saturday, Oct. 5.