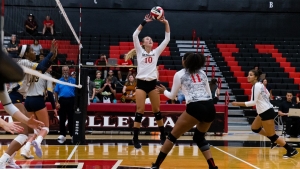 Individually, SDSU was paced by Hannah Turnlund and Victoria O’Sullivan, who recorded eight kills each, while Camryn Machado just missed out on her eighth double-double of the year after posting 21 assists and nine digs.

O’Sullivan, who had her streak of consecutive matches with double-digit kills halted at 10, also chipped in with a team-high three block assists, while Lauren Lee and Loren Teter contributed to the Aztecs’ defensive efforts with six digs apiece.

Conversely, USD was led by Katie Lukes’ 13 kills, while Thana Fayad added 10 put-aways of her own, hitting .529 on the night with one error in 17 attempts. In addition, Megan Jacobsen registered a .500 attack percentage (6-1-10) to go with three block assists, while Payton Douglass and Annie Benbow racked up 10 digs each.

The two teams combined for 11 hitting errors in the opening set; however, the Toreros’ Grace Frohling served up four aces, including three in during a 7-2 opening run that put the host school in front for good. The Aztecs were unable to trim the deficit under five points the rest of the way, with USD seizing control thanks to a 6-0 run after the visitors pulled to within 14-9. Fayad keyed the surge with two kills, while Frohling added a solo block to put the score essentially out of reach.

SDSU tried to keep pace in the second stanza, clinging to a slim 5-3 lead after kills by O’Sullivan and Turnlund. However, USD stole the momentum with a 6-1 blitz to vault in front for good. Lukes sparked the outburst with three put-aways, while Frohling added another, putting the Toreros on top 9-6.

The two sides combined for seven ties and three lead changes in the early stages of set number three, until USD inched ahead for good at 9-7 following an Aztec service error and a Jacobsen kill. Moments later, SDSU cut the gap to 11-10 after benefiting from a Torero serving mishap, but could not withstand a 9-3 run that provided USD an insurmountable 20-13 lead.