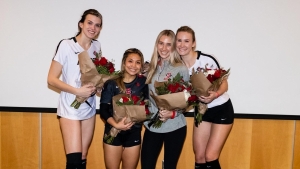 Victoria O’Sullivan recorded match-highs of 16 kills, six block assists and two service aces, helping the Aztecs (6-9, 6-9 Mountain West) snap an 11-match losing streak to the Rams dating back to 2014. The victory also marked the Scarlet and Black’s first win over CSU in San Diego since 2012.

Erin Gillcrist matched O’Sullivan with six total blocks on the afternoon, including a solo stop, adding five kills along with Nya Blair and Maddie Lenn.

Lauren Lee once again provided ample support along the back row, leading all players with 13 digs, marking the 12th time this season she has surpassed the double-digit plateau in that statistic, while Lenn came up with 12 scoops of her own. Not to be outdone, the Aztecs’ defensive efforts also featured Serena Hodson, who totaled a season-high five block assists.

San Diego State saved its best for last, posting a season-high .299 hitting percentage, knocking down 39 kills on 97 swings with just 10 error, while CSU finished with the second-lowest clip (.076), committing 22 errors against 30 kills in 105 attempts.

The Aztecs set the tone in the first set, hitting at a .452 clip with 15 kills against one error on 31 swings. O’Sullivan was spotless on the stat sheet during the frame, accounting for seven non-returnables without an error on 13 attempts.

SDSU led throughout, save for a pair of early ties, forging a 12-6 lead after a Vanderpan service ace. The Rams were unable to draw closer than five points the rest of the way, as a Kennedy Stanford kill trimmed the margin to 16-11. However, the Aztecs displayed their finishing kick, closing with an emphatic 9-3 run, highlighted by two O’Sullivan kills and a pair of combined blocks from Gillcrist and Feuerborn.

The second stanza was the closest of the three, as the teams witnessed eight ties and five lead changes.  With the score knotted at 18-18, CSU gifted the Scarlet and Black three straight points on an errant serve and two wayward attacks. Feuerborn also came through with two key kills down the stretch, while Hodson secured the set with another put-away and suddenly, the Aztecs had a commanding 2-0 lead on the set scoreboard.

The third frame was also a see-saw affair, as the Rams and SDSU combined for six ties and three lead changes. However, the Aztecs regained their consistency, hitting at a .314 pace during the set with 15 kills on 35 swings with four errors. On the flip side, CSU posted a .076 attack percentage, committing seven errors against 10 kills on 35 attempts.

O’Sullivan, who was bottled up in the second set, returned with a vengeance in third, posting six kills and a pair of block assists.

With the score tied at 9-9, the Aztecs took lead for good following a Ram attack error and a kill by O’Sullivan, who subsequently joined forces with Hodson on a block.

The Rams twice narrowed the gap to one, including a 16-15 spread after an SDSU ball-handling error. However, the Aztecs closed with a 9-4 rush to complete the sweep. The Scarlet and Black featured a balanced attack during that span, as O’Sullivan launched two kills, while Blair, Hodson, Gillcrist and Lenn all blasted non-returnables to keep the visitors at bay.

Stanford was the lone CSU player to post double-digit kills, finishing with 14, followed by Jacqi Van Liefde and Karina Leber.

Prior to the match, San Diego State recognized its four-player senior class, including Camryn Machado, a 2019 all-Mountain West selection who was injured during training camp, joining Gillcrist, Lee and Abby Pugh.