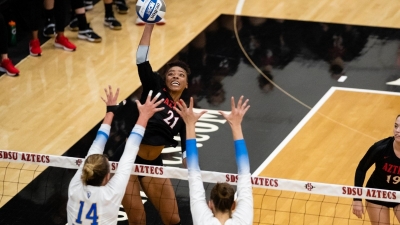 Once again, SDSU was paced by senior Victoria O’Sullivan, who led all players with a match-high 14 kills, while Zoi Faki finished with 10 put-aways to help keep Nevada (3-25, 0-17 MW) winless in conference play.

Not to be outdone, Feuerborn set a career-high with five block assists, often teaming with Walker, who tallied four, while Haynie came through with three rejections, including a solo stuff, to go with a pair of service aces.

The Aztecs set the tone in the opening set with a decisive 17-10 margin in kills, including six apiece by Faki and O’Sullivan. SDSU logged a .306 hitting percentage in the frame, committing six errors in 36 swings, while limiting the Wolf Pack to a .125 clip.

Still, Nevada nursed a slim 13-12 lead on a kill by Reka Monteleone before the Scarlet and Black took the lead for good following consecutive put-aways by Tautua’a and Haynie, sandwiched between two Wolf Pack attack errors. The Aztecs ultimately stretched the margin to 20-14 on Haynie’s solo block and were never threatened again. SDSU rode the arm of Faki, who floored three shots down the stretch, while Walker and Feuerborn joined forces on a block to provide the clinching point.

Save for a pair of early ties, the Aztecs took control in the second stanza despite trailing in kills (13-12). SDSU benefited from eight errant Nevada attacks in the set, while Faki and Haynie each served up an ace. Faki launched a kill midway through the frame to give the host school a seemingly safe 16-10 advantage.

The Wolf Pack narrowed the gap to three on three occasions, including a 21-18 spread following a Kyla Waiters put-away. However, Nevada could draw no closer, as the visitors self-destructed with a wayward serve and three straight attack errors to close out the set.

The Aztecs registered their highest hitting percentage of the evening with a .400 efficiency in the third set, knocking down 16 kills on 30 swings with just four errors. However, SDSU found itself on the wrong side of a 13-8 score following a combined block by Sydney Wyman and Sia Liilii. Undaunted, the Scarlet and Black stormed back with a 12-4 run to take a 20-17 lead. O’Sullivan supplied three kills in that stretch, while Jordyn Goldsmith blasted a pair of non-returnables as well.

Nevada threw in one last scare with a 4-1 spurt, as Wyman floored two shots after back-to-back kills by Andrea Alcaraz and Waiters, knotting the scoreboard at 21-21. However, the Wolf Pack gave the momentum right back to the Aztecs with a service errors, while O’Sullivan and Feuerborn followed with consecutive kills. Moments later, Feuerborn joined forces with Haynie to complete the sweep, as the SDSU bench erupted in jubilation.

The Wolf Pack were led by Waiters’ 10 kills, while Peterson and Liilii finished with four put-aways and four block assists each in the defeat. In addition, Alcaraz dished out a match-high 28 assists, while Spevak tied Tautua’a with 11 digs.

San Diego State will close out its 2021 campaign on Saturday, Nov. 20, when it plays host to San José State at 1 p.m. Prior to the Aztecs-Spartans showdown, SDSU will recognize the accomplishments of Zoi Faki, Natalie Smith, Brooklynn Hill, Ashley Vanderpan, Serena Hodson, Victoria O’Sullivan and Andrea Walker in a special ceremony to highlight Senior Day festivities.