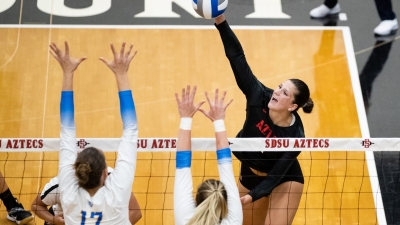 Victoria O’Sullivan tied for match-high honors with 18 kills and led all players with a .389 hitting percentage, while Zoi Faki recorded her fourth double-double of the season. However, the Aztecs (7-20, 4-11 MW) slipped to 1-6 on the year in five-setters. With her total, O’Sullivan needs just nine kills to reach 1,000 for her career in that statistic.

Faki finished with 13 kills and 13 digs, while Andrea Walker advanced the SDSU cause with nine put-aways of her own to go with a team-high four block assists. Heipua Tautua’a also got into the act with six kills and a season-high 18 digs to lead all players, while Ashley Vanderpan (29 assists) and Kennedy Feuerborn (19 assists) split time at setter.

Although the teams combined for 30 ties and 15 lead changes, neither side hit particularly well, as the Aztecs posted a .124 clip, compared to the Falcons’ .173 efficiency. However, Air Force maintained a sizable advantage in team blocks (17.0 to 7.0) and service aces (9-1) while holding a slight edge in kills (58-55) to help key its victory.

The Falcons (7-18, 4-11 MW) were paced by Bailey Keith, who tied O’Sullivan with 18 kills, while Joi Harvey contributed 12 put-aways and came up with a match-high 10 total blocks, including a pair of solo stops. In addition, BrookeLyn Messenger reached double figures in kills with 10 non-returnables while posting six blocks (one solo) to go with four aces, which led all players.

After dropping the opening set, which featured eight ties and six lead changes, the Aztecs registered their best hitting percentage of the match with a .345 efficiency in the second stanza, knocking down 13 kills on 29 attempts with just three errors. SDSU spread the wealth during the set, with O’Sullivan blasting five kills, followed by Faki (3), Walker (2) and Tautua’a (2).

The Scarlet and Black built a trio of four-point leads, including a 21-17 spread following a Falcon attack error. Air Force caught fire at this juncture and reeled off five straight points, including two on kills by Keith, who also combined with Harvey on a block. The Aztecs rose to the occasion after a timeout, as Jordyn Goldsmith and O’Sullivan each powered down a kill, while the Falcons imploded with a pair of attack errors.

The third set was another see-saw affair, with the two sides witnessing 10 ties and four lead changes. O’Sullivan blasted five additional kills in the frame, while Faki floored three additional shots. Once again, SDSU vaulted in front by a 21-17 count, only to see the Falcons roar back to tie the score at 22-22 following kills by Messenger, Harvey and Scires, along with an Allie Griffith ace.

However, Air Force was unable to gain the upper hand after self-destructing with a wayward serve and an attack errors. Moments later, Faki provided the clinching point with a cross-court kill to give the visitors a 2-1 lead in sets.

The Aztecs could not build on their momentum in the fourth set, thanks to a Falcon defense that posted seven team blocks and limited the Scarlet and Black to a minus-.029 hitting percentage. SDSU committed 11 attack errors against 10 kills on 35 swings, while Air Force totaled just four miscues while mustering nine kills in 31 attempts. Harvey became an unstoppable force at the net with five total blocks, including a solo stuff, while Cooper assisted on three stops as well.

The Aztecs faced a trio of five-point deficits, including a 16-11 spread after Keith and Harvey joined forces on a block. SDSU tallied three straight points on a kill by O’Sullivan and consecutive Faki put-aways to remain within striking distance. However, the Falcons closed with a timely 9-3 run to keep the visitors at bay and send the match into a deciding fifth set.

SDSU was unable to generate a consistent attack in the final frame, as Air Force came up with three more team blocks and benefited from three additional Aztec hitting errors. With the score deadlocked at 3-3, the Falcons took the lead for good on three straight kills by Keith, Messenger and Cooper.

Air Force upped its advantage to 9-4 shortly thereafter, as Harvey and Scires combined for blocks on consecutive SDSU attacks. Forced to rally, the Aztecs twice narrowed the gap to three, including an 11-8 margin on a Faki kill but could draw no closer. SDSU committed two errant attacks on the next two serves, while Keith knocked down two kills to seal the Aztecs’ fate

San Diego State will return to the court on Saturday when it battles New Mexico at 1 p.m. MT/noon PT in Albuquerque. The Aztecs will close out their season next week with a pair of home matches against Nevada (Nov. 18) and San José State (Nov. 20).