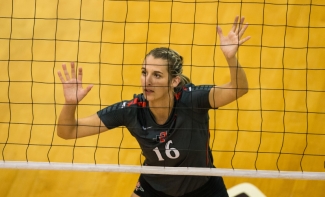 Aztecs improve to 8-2 in their last 10 matches

Despite experiencing a deficiency in team blocks (9.0-5.0), SDSU more than made up for it, maintaining a sizable 45-26 advantage in kills to key their victory. The Aztecs out-hit Fresno State .326 to .116 for the match, limiting the visitors to a minus-.160 clip in the second set.

In addition, the Scarlet and Black owned a 6-1 edge in service aces and a 21-15 margin in digs to move into sole possession of third place in the MW standings by a half-match over idle San José State.

SDSU was led by senior combo of Baylee Little (.444, 3 block assists) and Alexis Cage (.391, 2 aces), who launched 12 kills apiece, while junior Deja Harris finished with eight put-aways of her own to go with a pair of blocks.

In addition, the Aztecs received another solid performance from freshman Gabi Peoples, who finished with 34 assists and a pair of service aces, while senior Devyn Pritchard totaled eight digs and two helpers, along with a rare kill. Sophomore Ashlynn Dunbar also got into the act by blasting seven non-returnables while recording five digs and two blocks.

SDSU employed timely runs in each of the three sets to seize the momentum. The two sides were deadlocked at 7-7 in the opening frame before the Aztecs took the lead for good thanks to a 7-1 surge.  Little keyed the run with three straight kills, while Harris and Dunbar combined a block.

The Bulldogs trimmed the margin to three on four occasions, including an 18-15 spread following a kill by Taylor Slover. However, SDSU squelched Fresno State’s comeback hopes with a 7-1 closing run that featured three additional kills by Little and the two aforementioned aces by Peoples.

The Aztecs posted their best hitting percentage of the match in the second set at .375, knocking down 13 kills on 24 attempts with just four errors. Cage and Dunbar led the way with four put-aways each during that span, while the host school benefited from 10 errant Bulldog attacks.

SDSU found itself trailing 5-1 early on, but responded in a big way with a 19-4 blitz to build an insurmountable 20-9 advantage.

The two sides witnessed 12 ties and five lead changes in the third stanza before the Aztecs fashioned a 6-0 run to break a 15-15 tie. Harris punctuated the outburst with two straight kills followed by combined block with Peoples, putting the Scarlet and Black in control 21-15. Moments later, the Cage knocked down her final two kills of the night, sandwiched around a Little put-away, while a Fresno State attack error fittingly ended the match.

The Bulldogs were paced by Slover’s eight kills, while Lauren Torres (.833, 5 blocks) and Brielle Hefner finished with five apiece.

San Diego State hits the road for its next match when it travels to the Front Range of the Rockies to battle Air Force on Sunday, Nov. 5, starting at noon PT. The Aztecs defeated the Falcons at home on Oct. 7 by a 3-1 count.