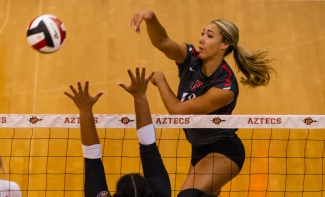 Photo:  Alexis Cage had 12 kills in the Aztecs' win over Nevada.  Courtesy goaztecs.com

The Aztecs maintained the statistical advantage in most categories, including kills (45-29), digs (34-29) and total blocks (9.5-3.0), capitalizing on 20 attack errors and 7 wayward serves by the Wolf Pack to secure a much-needed win.

Individually, Alexis Cage posted a match-high 12 kills and hit .375, while Deja Harris and Hannah Turnlund launched nine put-aways each to fuel the SDSU attack. Harris, who finished with a .471 hitting percentage, also led all players with five block assists, while Gabi Peoples came through with a season-best four stops to go with 34 assists. Not to be outdone, Devyn Pritchard registered another solid outing on the back row with a match-high 19 digs.

The Aztecs never trailed in the first set, racing to a 6-0 lead sparked by two Cage non-returnables and another by Harris, who hit .714 with five kills in the frame. Despite the early advantage, SDSU was unable to put the Wolf Pack in its rear-view mirror completely, as the visitors twice narrowed the gap to two, including a 20-18 margin following a kill by Kayla Afoa. However, the Scarlet and Black vanquished the threat with a 5-1 closing run as Ashlynn Dunbar floored two balls to provide the clinching points.

Early in the second stanza, the two teams battled through five ties before the Aztecs took the lead for good at 11-10 following another Dunbar put-away. SDSU ultimately took control when Baylee Little, Cage and Turnlund blasted three consecutive kills to give the host school a comfortable 21-15 cushion. Shortly thereafter, the Aztecs benefited from a Nevada service error, while Harris knocked down a kill to secure the set.

The Wolf Pack mustered their first two leads of the contest early in the third frame, including a 4-3 spread following a kill by Jamila Minor. However, SDSU methodically seized momentum with a timely 16-6 blitz to build an insurmountable 19-10 lead. Turnlund ignited the run with four put-aways, while Dunbar and Cage launched two apiece during that span.  Dunbar also added a kill down the stretch and combined with Little on a block before the match ended on a bad Nevada set.

Ayla Fresenius was the lone Wolf Pack player to a post double-digit kill total with 11 for the match while scooping up a team-high eight digs. In addition, Sam Hayward finished with seven non-returnables of her own, while Dalyn Burns and McKayla Wuensch dished out 12 assists apiece.

San Diego State will make a quick trip to Fresno State on Tuesday, Oct. 3 before returning to Aztec Court for a showdown vs. Air Force on Saturday, Oct. 7 at 6 p.m. PT.