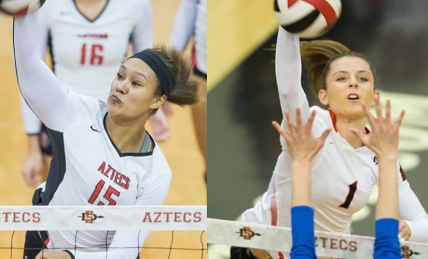 November 28, 2016 (San Diego) - Sophomores Deja Harris and Alexandra Psoma have been named to the all-Mountain West volleyball team for their performances during the recently completed 2016 season.

Harris, a middle blocker from Las Vegas, Nev. (Calvary Chapel HS), led the Aztecs in blocks, both overall (1.04 per set) and in conference matches (1.11 per set) as well as hitting percentage (.346 overall, .300 MW). She ranked ninth in the Mountain West in blocks (overall and league matches) and was seventh in the conference in hitting percentage in all games and eighth in league matches.

Harris’ highs during the 2016 campaign included a career-high 19 kills on two occasions (vs. Stony Brook, Sept. 10; at Nevada, Nov. 21) and nine total blocks vs. Colorado State (Nov. 10).  She also hit a season-high .909 in the win over Cal State Fullerton on Sept. 17 to establish a new SDSU record.

Psoma, an outside hitter from Athens, Greece, led the Aztecs in kills with averages of 3.34 per set overall and 3.56 per set in conference play. Her point averages of 3.69 (overall) and 3.96 (MW matches) led the team as well while ranking 10th and fifth in the league respectively.

During the season Psoma set her SDSU career high with 24 kills vs. Colorado State on Nov. 10 and also established her Aztec best in blocks on two occasions with six against both Fresno State (Oct. 6) and UNLV (Nov. 16). She reached double figures in kills in 25 of SDSU’s 32 matches including each of the season’s final 11 contests.

San Diego State ended its 2016 campaign with an overall mark of 17-15 and 9-9 in the Mountain West as it finished in sixth place in the final conference standings. The Aztecs concluded their 2015 campaign with a late-season surge that saw them record victories in three of their final four matches. The Aztecs’ 9-9 league record also means that they have finished at .500 or above in conference play each of the past seven seasons.