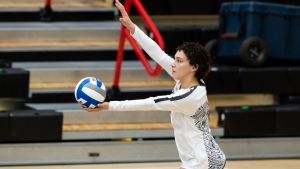 Andrea Walker also contributed to the Aztec fortunes, hitting .417 for the match on seven kills with two errors in 12 attempts, while Erin Gillcrist launched seven non-returnables of her own. Not to be outdone, Lauren Lee posted a season-high 16 digs, marking the fifth straight contest of recording double digits in that category.

O’Sullivan carried the Scarlet and Black through the opening set, hitting a crisp .545 during that span with seven kills on 11 swings with just one miscue. In addition, Tautua’a anchored the Aztec defense in the frame with 10 digs.

Clinging to a slim 13-11 advantage, SDSU fashioned a 7-1 run to give itself some separation. The Aztecs benefited from two UNM attack errors and a pair of wayward serves in that stretch, while O’Sullivan knocked down two kills to help put the host school in control at 20-12. The Lobos were unable to draw closer than four points the rest of the way, as Walker, O’Sullivan and Abby Pugh each floored a shot to quash any comeback hopes.

It was Blair’s turn to shine in the second set, as the SDSU sophomore totaled five kills on 10 attempts with one error, while Tautua’a served up a pair of aces. The Aztecs led throughout, save for two early ties, eventually building a 13-7 lead following an O’Sullivan solo block.

UNM crept to within two at 16-14, but SDSU responded with five six straight points, capped by a Tautua’a kill and a Gillcrist service ace, which essentially short-circuited the visitors’ momentum.

Set three was the most closely contested of the day, with the two sides combining for six ties and two lead changes. Individually, Walker (.714) led the way with six kills on seven attempts, while O’Sullivan added five more to her total, However, the Lobos avoided the sweep by hitting .312 during the frame, despite trailing in kills 16-13.

With the score knotted at 19-19 apiece, UNM closed with a 6-4 spurt, punctuated by a Kaitlynn Biassou’s kill.

What little momentum the Lobos had evaporated in the fourth set, as the Aztecs limited the visitors to a minus-.045 hitting percentage on just four kills with five errors in 22 swings. SDSU overcame nine attack errors of its own with 16 kills, including five by O’Sullivan.

The Aztecs built a pair of nine-point leads, including a 14-5 spread following an O’Sullivan put-away. UNM narrowed the gap to two at 16-14 on a combined block by Emma Smith and Tori Tua. However, kills by Pugh and Vanderpan, sandwiched around a Lobo attack error short-circuited the threat.

SDSU fittingly received two kills down the stretch from O’Sullivan, while Blair added a service ace.

UNM received 14 kills from Biassou, while Tua, Smith and Avital Jaloba finished with six blocks each.

San Diego State continues its homestand next weekend when it plays host to Nevada on consecutive days, Feb. 26-27.