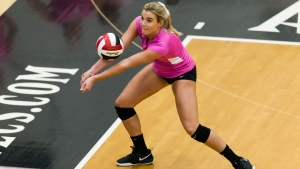 Individually, Victoria O’Sullivan led all players with 10 kills, while Tamia Reeves launched nine put-aways of her own and hit at a .450 clip. Hannah Turnlund (.412) and Lexie Hamrick (.357) also got into the act with seven kills apiece, while Loren Teter anchored the back row with 15 digs. Not to be outdone, setter Camryn Machado notched her first double-double in a Scarlet and Black uniform, finishing with 35 assists and 12 digs.

The Aztecs trailed 3-2 in the opening frame before vaulting in front to stay, benefiting from an errant Akron serve and a combined block by Turnlund and Hamrick. Clinging to a one-point lead moments later at 8-7, SDSU fashioned a 10-5 run to take control, with O’Sullivan posting two kills during that span and teaming with Hamrick on a block. The Zips never got closer than four points the rest of the way, as the Aztecs secured the set on a Turnlund kill.

In the second stanza, SDSU found itself on the wrong side of a 9-6 score before seizing momentum with a 13-5 blitz. Reeves keyed the run with four kills, while Hamrick had two blocks, including a solo stop to help give the Aztecs a 19-14 cushion. Reeves kept Akron at bay with two more non-returnables down the stretch, while Maddie Lenn closed off the set with a service ace.

SDSU saved its best for last, hitting at a .433 pace in the third set on 15 kills in 30 attempts with just two errors. Turnlund took center stage during the frame, blasting five kills on six swings with no miscues, while Reeves totaled four put-aways of her own.

Despite the gaudy numbers, the Aztecs led by just one at 12-11 following a kill by the Zips’ Hannah Yaconis. Unfazed, SDSU stymied the threat with a 13-7 closing run, as Turnlund and Alexis Ratliff supplied two kills apiece.

Akron was led by Teagan Ochaya’s nine kills, while Jenn Durra had eight in the loss.

In the afternoon clash, San Diego State limited Bryant to a paltry .053 hitting percentage, capitalizing on 22 attack errors. The Aztecs, who hit .283 for the match themselves, also owned a sizable edge in kills (42-28) and digs (51-34), battling through just seven ties and one lead change to claim the victory.

Individually, Camryn Machado logged her second double-double of the day with 37 assists and 10 digs, while Hannah Turnlund duplicated the feat with 10 kills and 11 digs.  In addition, Victoria O’Sullivan fired 10 non-returnables of her own, while Lexie Hamrick hit .545 against the Bulldogs with seven kills and just one error in 11 attempts. The SDSU cause was also advanced by Loren Teter, who surpassed the double-digit plateau with a match-high 12 digs.

The Aztecs trailed 4-1 in the first set before capturing the next seven points, as Bryant self-destructed with three straight attack errors during that span. The Bulldogs fought back to tie the score on three occasions, including an 11-11 deadlock following a Haley O’Brien kill.  However, a kill by Turnlund followed by two consecutive O’Sullivan put-aways put the Scarlet and Black in front to stay.

Bryant, which fell behind by as many as seven at 20-13, narrowed the gap to 23-22 after an Emma McGovern kill and an Aztec hitting error. SDSU withstood the challenge, however, as a wayward Bulldog serve and an O’Sullivan kill provide the clinching points for the Scarlet and Black.

In the second frame, the Aztecs broke open a tight 3-3 score with a timely 16-6 run to take control. SDSU received balanced production during that stretch, as Hamrick provided three kills, while Turnlund and O’Sullivan recorded two apiece. Trailing 19-9, the Bulldogs twice cut the deficit to six, but could draw no closer.

The Aztecs were never threatened in the third stanza, racing to an 8-1 lead, thanks in large part to O’Sullivan, who collected three block assists and added a kill out of the gates. The Bulldogs hit minus-.068 for the set, posting just nine kills against 12 errors in 44 swings. Conversely, San Diego State committed just three miscues on 33 attempts, knocking down 13 kills, as Reeves blasted five herself with no errors.

Bryant was paced by Riley James’ 11 kills, while McGovern totaled six to go with a team-high 10 digs.