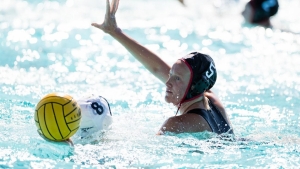 The Aztecs, ranked No. 17 in the most recent Collegiate Water Polo Association (CWPA) poll, were led by seven goals from senior Karli Canale, including her second five-goal game in as many outings. Canale leads San Diego State with 24 goals in eight games and is averaging a hat trick per game.

Emily Bennett, a senior out of Oakdale, Calif., added two goals on the day and assisted on four others.  Freshman Laurene Padilla, seeing the first action of her college career, totaled two goals and an assist, while Samantha Loughlin and Haley Hagerty, both juniors, each scored once, and Loughlin added three assists.  Juniors Delaney Binette and goalie Zoe Morgan each had an assist and defensively Morgan totaled 14 saves in the two games.

The Gauchos jumped out to a 3-0 lead in the first two and a half minutes, before Karli Canale ended the run with a power play strike, the first of four successive goals for the La Jolla High School product. However, UCSB matched every goal Canale scored with one of its own and led 5-4 midway through the second quarter.

Trailing 6-4 with 59 seconds remaining before the intermission, Haley Hagerty scored to send the game to the break with San Diego State down one goal 6-5.

Emily Bennett scored just over a minute and half into the third period to get the game back to level at 6-6. But before the quarter had ended, UC Santa Barbara tacked on three more goals to lead 9-6 heading into the final frame.

Bennett found the back of the cage with 5:10 to play to make it 9-7 and Samantha Loughlin followed that goal with a tally of her own to make it 9-8 with 3:35 to play.

UCSB tacked on an insurance goal with just over two minutes to play in regulation to make it 10-8. Canale completed her five-goal effort with a strike with 1:07 to go for what would end up being the final score of 10-9.

The Gauchos scored four unanswered goals to lead 4-0 at halftime.

At the 3:53 mark of the third quarter, freshman Laurene Padilla got the Aztecs on the board with the first goal of her SDSU (0-8) career to cut the UCSB lead to three goals at 4-1.

Early in the fourth period the Gauchos scored to push its advantage back to four goals at 5-1, but Canale responded with back-to-back scores to make it 5-3. Then with 3:41 left on the clock, Padilla got the game's last goal, which made the final score 5-4.

Goalie and Santana High alum Zoe Morgan had nine saves in the loss.

San Diego State returns to the pool next Saturday and Sunday when it welcomes the Michigan Wolverines to the Aquaplex. The teams will play a pair of games on Saturday at noon and 2 p.m. and a single game on Sunday at 1 p.m.