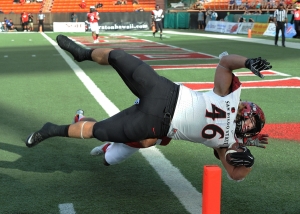 All photos credited to:  Ernie Anderson
By Liz Alper
December 24, 2015 (San Diego) - Everyone always worries that San Diego State will be bothered by the time difference when they travel to Aloha Stadium.
Rashaad Penny proved them wrong right away.  The Special Teams Player of the Year returned the ball 103 yards on the opening kickoff in the Hawaii Bowl against the University of Cincinnati to give the Aztecs a 7-0 lead.
Starting quarterback Maxwell Smith's leg wasn't healed enough to start in the bowl game as he had hoped, but that didn't faze Christian Chapman; the freshman quarterback, playing in his first bowl game, rolled out and fired to Mikah Holder wide open in the end zone to give the Aztecs a 14-0 lead.  It was still the first quarter.
As a side note, it should be a law that whenever Malik Smith makes a great interception like he did in the first, the Aztecs score a touchdown.  Alas, I am not one of the football gods.
Anyway, in the second quarter, SDSU ran an option pass play of their own in which Donnell Pumphrey connected with Dakota Gordon for the score.  21-0 Aztecs.  People seriously thought Cincinnati would win.
In the second half, the slaughter continued.  The Aztecs stoned a ridiculous fake field goal pass attempt by the Bearcats and took it all the way back down the field, where Gordon scored his second touchdown of the game for a 28-0 Aztecs lead.
Do I even bother to type "the Aztecs weren't done yet"?  In any event, they weren't.  Pumphrey easily ran ahead for the score and it was 35-0 Aztecs with 11 and a half minutes left in the game.
The defense got in on the fun too.  Defensive end Alex Barrett intercepted the ball for a pick six to bring the score to 42-0 Aztecs.
The Bearcats would tally on a Mike Boone run, but that would be all they could muster.  SDSU doesn't get the shutout, but they take the Hawaii Bowl 42-7 to cap off an excellent season.  This program is only getting better. 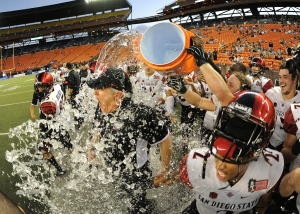