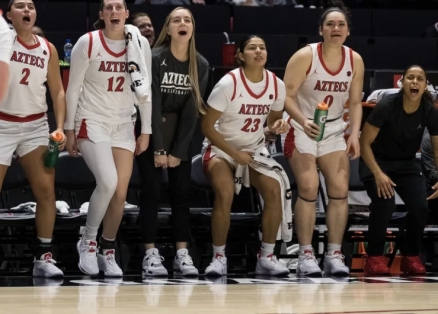 The Aztecs have won seven games in a row

Four Aztecs scored in double-digits, led by Abby Prohaska’s career-high 23 points. Sophia Ramos had 12 points while Kim Villalobos and Asia Avinger each had 10. Avinger led the team with six assists.

The Aztecs missed their first four shots but then made their next four. SDSU tied it up at 9-9, but never could take a lead and the Tritons finished the opening quarter on a run to go up 24-15 after 10 minutes led by Izzy Forsyth’s 10 points.

SDSU cut their deficit to four late in the second quarter and trailed 38-32 at the halftime break.

The Aztecs defense picked up in the third quarter, forcing three steals in UCSD’s first three possessions and then later causing them to miss eight straight shots, but still couldn’t take the lead.

The Aztecs forced 22 turnovers and outscored UC San Diego 34-16 in the paint.

The Aztecs held the Tritons to 21 percent shooting in the second half.

Abby Prohaska’s 23 points was the most by an Aztec this season.

The Aztecs play San Francisco Sunday at 2:30 p.m. at the Chase Center, the home of the Golden State Warriors.