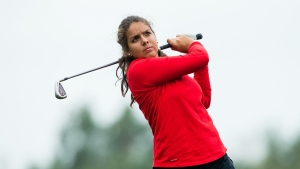 October 19, 2018 (Stanford) - The San Diego State women’s golf team remains in 10th place at the Stanford Intercollegiate presented by Dr. Condoleezza Rice after shooting a 10-over-par 294 during the opening round on Friday at Stanford Golf Course.

With their performance, the Aztecs find themselves five shots out of the top five heading into Saturday’s second round on the par-71, 6,171-yard course layout. San José State (+5) occupies the fifth position, while Arizona State (+6) and Florida State (+6) are tied for sixth, followed by Denver (+7) and California (+8)

Individually, SDSU’s Gioia Carpinelli (Boppelsen, Switzerland), Sara Kjellker (Hollviken, Sweden) and Fernanda Escauriza (Asunción, Paraguay) find themselves amongst a seven-way logjam for 20th place after each fired a 1-over 72.

Carpinelli paced the team with three birdies, including an impressive drain on the par-4, 386-yard No. 13, which ranked as the fifth-toughest hole of the day. However, a double-bogey on the par-4, 420-yard 18th prevented a loftier perch.

Similarly, Kjellker got to 1-under for the round after sinking the second of her two birdies at the par-4, 350-yard No. 11, but consecutive bogeys at the par-3 14th and the par-4 15th derailed her momentum.

Meanwhile, Escauriza tied for the field lead with 15 pars on the day, including eight straight to open the round, to go with a birdie of her own on the 11th green. The Aztec junior added seven more pars on the back nine, but an untimely bogey at No. 15 thwarted her advance.

Despite their tribulations, the aforementioned SDSU trio sits just five shots behind a pack of five golfers who share the lead at 5-under 67, including USC’s Alyaa Abdulghany and Malia Nam, UCLA’s Clare Legaspi, Stanford’s Albane Valenzuela and Pepperdine’s Hira Naveed.

USC (-12) grabbed a commanding 12-stroke advantage in the team standings over second-place Stanford (E), while Pepperdine and Northwestern are tied for third at 4-over.

Lee remains in a tie for the 71st position after carding an opening-round 78, while Anastasi, who also experienced a double-bogey at the par-4 No. 9, sits two shots behind in a tie for 81st on the heels of an 80.

San Diego State will tee off alongside Pepperdine and Harvard for the second round of the Stanford Intercollegiate, starting at 7:30 a.m. on hole No. 1.

Go Aztecs! I cannot believe the amount of talent that was in the tourney.