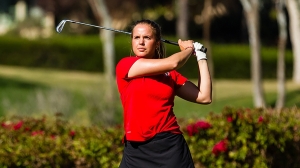 April 7, 2019 (Napa) - The San Diego State women's golf team remains in a tie for 11th place at the Silverado Showdown after shooting a 14-over-par 302 on Sunday during the first round at Silverado Resort.

With their score, the Aztecs find themselves eight shots behind fifth-place Stanford (+6), along with California and Wisconsin, heading into Monday’s second round on the par-72, 6,120-yard North Course.

San José State (+1) grabbed a slim two-stroke lead in the congested team standings over UCLA, Northwestern and USC, which are tied for second at 3-over.

Individually, SDSU was led by Sara Kjellker (Hollviken, Sweden), who finished the day in a tie for 15th after firing a 1-over 73. After recording a triple bogey on the par-4, 344-yard No. 8, the Aztec sophomore was 5-over for the round but rebounded with aplomb, playing spot-free golf the rest of the way, highlighted by four birdies.

With her card, Kjellker sits just three shots behind co-leaders Stephanie Lau and Brooke Riley of Northwestern, who both recorded a 2-under 70, while seven golfers find themselves in a logjam for third at 1-under.

In addition, senior Kitty Tam (Hong Kong, China) and freshman April Ranches (San Diego, Calif.) remain three strokes in back of Kjellker in a tie for 44th after each posted a 76.

Tam opened with two birdies but could not sustain the momentum, suffering five bogeys and one double bogey against one additional birdie at the par-3 15th.

Ranches also made birdie at No. 15 and finished with another drain at the par-5, 503-yard No. 18. However, four bogeys and a double bogey prevented a loftier perch.

Elsewhere, Fernanda Escauriza (Asunción, Paraguay) finished the day in a tie for 58th, thanks to an opening-round 77. Despite a team-high 12 pars, the SDSU junior was hampered by four bogeys and one double bogey while notching just one birdie at the par-5, 491-yard No. 9.

Rounding out the Aztec delegation was Gioia Carpinelli (Bopplesen, Switzerland), who landed in a tie for 83rd after 18 holes after recording an uncharacteristic 81. The SDSU sophomore got to 2-over for the round after making a birdie of her own on the ninth green. However, three bogeys and two double bogeys on the back nine derailed her momentum.

San Diego State will tee off alongside California and Colorado on Tuesday for the second round of the Silverado Showdown, starting at 8:09 a.m. PTon hole No. 10.