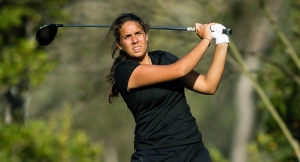 April 15, 2019 (Rancho Mirage, Calif.) - The San Diego State women's golf team finds itself in second place at the 2019 Mountain West Championship after shooting a combined 15-over-par 303 on Monday during the opening round at Mission Hills Country Club.

With their score, the Aztecs finished the day two strokes ahead of third-place Nevada (+17) and four shots in back of front-runner San José State (+11) on the par-72, 6,270-yard Dinah Shore Tournament Course.

Individually, Fernanda Escauriza (Asunción, Paraguay) is tied for third place after 18 holes with Nevada’s Kaitlin Collom after firing a 73. The SDSU junior was in cruise control, getting to 3-under for the round after sinking the last of her team-high four birdies on the par-5, 494-yard No. 11. Following four straight pars, however, the 2017 conference medalist hit a snag, logging two straight bogeys before finishing with a double bogey on the par-5 18th.

Despite the stumble, Escauriza remains just two shots behind Fresno State’s Brigitte Thilbaut (-1), who was the lone golfer to break par in round one, while San José State’s Natasha Andrea Oon (E) sits in second. Five players are also tied for the fifth position on a crowded leaderboard, as SJSU’s Abegail Arevalo and Antonia Malate each carded 74, along with UNLV’s Polly Mack and Cathy Liu and Boise State’s Tara Finigan.

In addition, the Aztecs’ Gioia Carpinelli (Boppelsen, Switzerland) and Kitty Tam (Hong Kong, China) finished the day in 12th after both recorded a 76.

Carpinelli, who was one of four competitors to register 13 pars in the first round, played spot-free golf through 13 holes, highlighted by consecutive birdies on the No. 9 and No. 10 greens. Like Escauriza, however, the SDSU sophomore had her momentum derailed down the stretch, thanks to a double bogey on the par-3 14th, followed by a bogey at the par-4 16th and a triple at No. 18.

Conversely, Tam closed with a rush, overcoming previous adversity with four pars as well as a birdie at No. 16, which ranked as the second-toughest hole of the opening round. Earlier the Aztec senior, managed just one birdie at No. 11 against four bogeys and a double bogey.

Elsewhere, Sara Kjellker (Hollviken, Sweden) shot a 78 to finish the day in a tie for 17th, two strokes behind Tam and Carpinelli. In addition to a birdie at the par-3 No. 5, the Aztec sophomore recorded 12 pars, but three bogeys and two double bogeys prevented a loftier perch.

The SDSU starting five also included Daniela Anastasi (La Jolla, Calif.), who finds herself in a tie for 35th after posting an 82. The Aztec senior was plagued by a five bogeys and a double bogey on the front nine and was unable to recover despite six pars after the turn.

The Mountain West Championship continues on Tuesday when San Diego State tees off alongside San José State and Nevada starting at 8:30 a.m. on hole No. 1. A live scoring link, courtesy of Golfstat, will be available on GoAztecs.com.