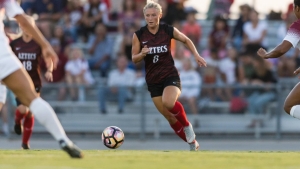 Kiera Utush scored the first goal of her collegiate career

August 22, 2019 (San Diego) - Kiera Utush, a freshman from Rocklin, Calif., scored on a penalty kick five minutes into the second half to put the San Diego State women’s soccer team on the scoreboard, but it wasn’t enough to defeat the No. 22 Texas Tech Red Raiders on Thursday night.  SDSU (0-1-0) came out on the short end of a 6-1 decision in both team’s season opener.

Utush’s goal, the first of her collegiate career, came in the 51st minute.  She was taken down by a Red Raiders’ defender in the box.  With the ball on the spot, she calmly slotted her shot past the keeper’s right hand to open her college account.

The tally was the spark the Aztecs needed.  They went on the enjoy the vast majority of the run of play in the second 45 minutes.  As a team, SDSU outshot the Red Raiders 5-to-4 in the second half and forced Texas Tech to play the way San Diego State wanted and not the other way around, which is what happened in the first half.

Texas Tech (1-0-0) jumped on the Aztecs in the first half with five goals and dominant play.  They played directly at SDSU and challenging every possession and putting San Diego State back on its heels.

The scoring was opened at the 2:44 mark on a Jayne Lydiatt goal and eight minutes later, in the 11th minute, Lydiatt struck again to make the score 2-0.  Then in the 37th minute, the Red Raiders got a pair of goals from Kirsten Davis.  Her first tally came at the 36:04 mark and just 28 seconds later she scored again to push the Texas Tech advantage to 4-0.  Before the whistle blew to end the half, the Red Raiders picked up a fifth goal.  It came at the 41:19 mark, off the boot of Demi Koulizakis, and sent the teams to the intermission with SDSU down 5-0.

Utush scored early in the second half to cut the lead to 5-1, but in the 71st minute Texas Tech got the lead back to five goals on a Marisa Weichel strike to make it 6-1, the final score.

In the first half, Texas Tech outshot the Aztecs 10-to-4 and put six shots on goal, coming away with five scores.

For the match, Chloe Frisch led the Aztecs with three shots.  Malia Kaleiohi produced two shots as did Utush.  Both of Kaleiohi’s attempts were on frame, with Utush putting one in the net. Ariana Robles and Laura Fuentes each took one shot, with Robles’ being on goal.  Keeper Brooke Lisowski (0-1-0) took the loss.  She saved three of the nine shots which reached her line.

For Texas Tech, Davis led the team with four shots.  She and Lydiatt each had a pair of tallies.  Marissa Zucchetto (1-0-0) made three saves while surrendering one goal.

"This was really a tale of two halves and were taking away from this one what we did in the second half.  I thought in the second half we played as well as we have in the last three years.  At half time I was less than thrilled at where we were, but to show the grit, both physically and emotionally, to come back in the second half against a very good team really speaks volumes about the type of players we have.  We got a goal and sorted some things out regarding our lineup and I’m very excited about the second half and where we ended up." – SDSU head coach Mike Friesen

SDSU continue its four-game homestand on Sunday against the LIU Sharks on the Sports Deck.  Kickoff is scheduled for 12:00 p.m.