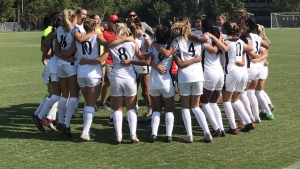 September 2, 2018 (Davis) - San Diego State true freshman Lovisa Norrby scored off a set piece in the 65th minute to help lift the Aztecs to a 1-0 road victory at UC Davis on Sunday afternoon. SDSU improved to 2-3 on the season, while the Aggies dropped to 3-3 overall.

The Aztecs withstood a UC Davis attack in the first half that resulted in them being outshot, 9-2, and being on the short end of a 5-1 count in corner kicks. Even with the Aggies dictating the pace, San Diego State managed to escape the initial 45 minutes with the score knotted at 0-0.

SDSU turned the tables on the home side after making a handful of halftime adjustments. The Aztecs managed to get momentum on their side and were consistently on the attack. The pressure finally paid off in the 65th minute when San Diego State earned a corner kick. Senior Nikolina Musto waited for her teammates to get set and lofted a service into the box where Norrby waited. The freshman rose and headed the ball past UCD goalkeeper Alexis Smith for what would be the only goal of the game.

Much like the first half, the Aztec defense held firm the rest of the way to end a three-game losing streak. Despite losing the overall battle in shots, 16-12, SDSU rebounded from its first-half performance to outshoot the Aggies, 10-7, in the second half. The Aztecs also held a 6-3 advantage in corner kicks in the final 45 minutes.

Four different Aztecs have scored this season and they all have been true freshmen. Taylor Moorehead scored vs. New Mexico State, Lauren Dicus found the back of the net vs. Texas Tech, Florence Laroche posted the first goal of her career at California and Norrby tickled the twine at UC Davis.

For the second time this season, senior Nikolina Musto assisted on a goal off a corner kick. The first went to Dicus vs. Texas Tech before her effort today at UC Davis.

Junior goalkeeper Gabby English posted her second shutout of the season and made a season-high eight saves.

San Diego State returns to America’s Finest City to prepare for the fourth game of a four-game road stretch, but schedule will keep the Aztecs within city limits as it is set to face cross-town foe San Diego. The local derby is slated for Friday at 7 p.m. inside Torero Stadium.