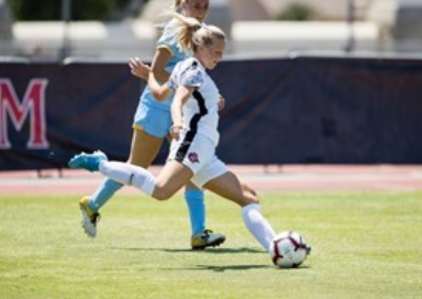 August 25, 2019 (San Diego) - Chloe Frisch broke a 0-0 tie with just under two minutes to play, propelling the San Diego State women’s soccer team to a 1-0 decision over the Long Island University Sharks on Sunday afternoon at the SDSU Sports Deck.

With just over two minutes left in a scoreless tie, freshman Kiera Utush played a pass down the right sideline, which Frisch collected.  Frisch, a native of Solana Beach, then drove down the sideline, cut back to the center of the field and hammered a shot from just outside the right corner of the 18.  The shot crossed the goal line inside the upper corner of the far post putting San Diego State (1-1-0) up 1-0 with just under 1:40 to play in regulation. It was Frisch’s first tally of the 2019 season and Utush’s first assist.

From that point on, the Aztecs ran out the clock and secured the team’s first win of the season.

“When I got the ball, I had tunnel vision,” said Frisch. “I didn’t see anyone else on the field and was totally focused on scoring and not letting the game get to overtime.”

In the game, San Diego State did to LIU (0-2-0), what they had experienced on Thursday night in a season opening loss to No. 22 Texas Tech.  SDSU controlled the run of play and outshot the Sharks 14-to-2, including 7-to-1 in shots on goal.

In the first half, the Aztecs attempted seven shots, with the most dangerous chance coming from senior Ariana Robles.  In the 14th minute, she took a centering pass at the far post from junior Malia Kaleiohi, and just missed tucking it into the net behind the LIU keeper.  Of the seven attempts in the first 45 minute two were on frame, but the teams went to the half tied, 0-0.

In second half, it was more of the same.  The Aztecs controlled the play for the most part with LIU creating its only dangerous scoring chance at the 52:35 mark.  Veronica Seeger took a centering pass at the far post and headed it toward the other side of the goal, but senior keeper Brooke Lisowski made a diving stop to preserve the 0-0 tie.  The Sharks only other shot came in the 81st minute and it was blocked by the defense.

Lisowski (1-1-0) stopped the only shot to reach her line and recorded her first clean sheet and her first win as an Aztec.

SDSU produced 14 shots on the day led by three each from Frisch, Utush and Robles.  Kaleiohi took two shots and Phoebe Leitch, Rachel Speros and Lauren Dicus had one shot each.  The 14 attempts are the most for the team this season and the most since the Aztecs took 22 in a 5-0 victory over Air Force (10/21/18) last season.

LIU’s keeper, Lydia Fraga Cordoba (0-2-0), made six saves and gave up the only goal in the game.

"I wasn’t thrilled with how we played today in terms of a dominant performance, but we earned the win and at this level, to defeat any team is an accomplishment and it’s important.  So, we didn’t play at our best, but it was the first Sunday game of the season, it was very warm, and those are excuses we could have used, but to have a gritty performance where we didn’t allow chances and to find a late game winner in huge for us. Defensively we limited them to just two shots, which is fantastic and the overall performance back there was a step in the right direction." – SDSU head coach Mike Friesen
UP NEXT

SDSU continue its four-game homestand on Thursday against the San Francisco Dons on the Sports Deck.  Kickoff is scheduled for 7:00 p.m.  Links to live stats and streaming video will be available on the team’s schedule page at www.goaztecs.com.