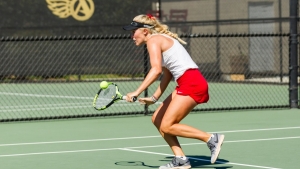 Two Aztec duos continue to round of 16

October 19, 2018 (San Diego) - San Diego State women's tennis completed day two of ITA Southwest Regionals at the Barnes Tennis Center on Friday with wins in two of its four doubles matches in the round of 32.

Junior Mia Smith and sophomore Abbie Mulbarger topped Abi Altick and Alaina Millar, 8-3, in the round of 32 and will advance to Saturday’s round of 16 where they are set to face USD’s Solyman Colling and Maria Torres at 9 a.m. The winner of the match will advance to the quarterfinal round of doubles, to be played on Saturday at 10 a.m.

Senior Magda Aubets and sophomore Nnena Nadozie also logged an 8-3 victory over Arizona’s Csenge Furak and Taylior Tamblyn in the round of 32. Aubets and Nadozie continue to the round of 16 on Saturday morning to play UCLA’s Gabby Andrews and Ayan Broomfield at 9 a.m. Like in Smith/Mulbarger’s case, the winning pair in the matchup will play in the quarterfinal round of doubles at 10 a.m.

Freshmen Shakhnoza Khatamova and Aesha Patel, who enjoyed a round of 64 bye, took on Hawai’i’s Nikola Dolakova and Maayan Sela in the round of 32 where the Aztec duo fell, 8-3. Senior Jenny Moinard and freshman Ellie Ashley were also not as fortunate in the round of 32, dropping an 8-3 decision to UCLA’s Elysia Bolton and Jada Hart.

A number of Aztecs will continue to play in consolations matches in both doubles and singles on Saturday afternoon. Saturday’s competition begins with doubles matches at 9 a.m. Results and updated brackets from the Southwest Regionals will also be available on GoAztecs.com following each day of play. Parking and admission at Barnes Tennis Center are free for spectators.