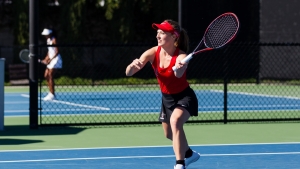 February 9, 2019 (Fullerton) - San Diego State women's tennis clinched on the road this afternoon, taking down Cal State Fullerton 4-2. The Aztecs captured the doubles point and went on to take the necessary three victories in singles play to win the dual.

The Aztecs set themselves up for success early with a win in doubles as the top two pairs claimed wins over Fullerton. Despite the No. 3 match going to the Titans, freshman Alicia Melosch and sophomore Nnena Nadozie put together a 6-4 win over Masako Makiba and Caisey Lee Emery in the second seed, while freshman Shakhnoza Khatamova and senior Jenny Moinard made easy work of their opponents Sarah Nuno and Karla Portalatin to finish 6-3 and claim the point for SDSU.

In singles play, Fullerton charged back to claim the first match to finish, as Portalatin topped Nadozie, 6-3, 6-3, but Mulbarger came back after a loss in doubles play to put away Eira Tobrand, 6-4, 6-0, in the fifth seed and tally a second point for the Aztecs. The teams repeated the back-and-forth wins as the Titans picked up their second point in the sixth seed with Jadie Acidera’s 6-3, 6-4 win over Agustina Rimoldi Godoy, but Khatamova put up No. 3 for SDSU with her 6-3, 1-6, 6-3 finish against Emery on court three.

With Melosch and Moinard still active on the courts, it was newcomer Melosch who put a wrap on a three-set victory over Fullerton’s Luxizi Meng, 7-6 (6), 4-6, 6-2, to clinch the win for the Aztecs and tally the team’s fourth win of the season.

SDSU won its fifth straight doubles point in Saturday’s dual against the Titans.

The Scarlet and Black return to the Mesa on Sunday with a 4-1 record to host Cal Poly. First serve against the Mustangs is set for 11 a.m.