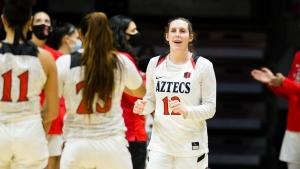 Mercedes Staples scored 24 points for the second straight game, tying a career high. She was 10-for-16 from the floor and scored 11 of her points in the fourth quarter. She also grabbed six rebounds and dished out six assists in a team-high 38 minutes. Freshman Kamaria Gipson scored 10 points and had a team-high +14 plus/minus while playing a career-high 30 minutes.

Air Force started the game 1-for-11 with nine of their field goals being three-point attempts. The Aztecs struggled from the field early on as well and found themselves down double-digits in the second quarter.

SDSU finished the first half on an 8-2 run and then started the third quarter on an 8-0 run and never relinquished the lead.

The Aztecs went 6-for-10 from three in the fourth quarter after making just one triple in the first three quarters. They led by as much as 13 before the Falcons closed the game on a mini run.

The Aztecs were 6-for-10 from three in the fourth quarter after going 1-for-5 in the first three quarters.

The Aztecs had a season-high 17 assists, topping the 16 they had in their last game vs. Utah State.

SDSU wraps up their series with Air Force Sunday at 1 p.m. inside Viejas Arena.