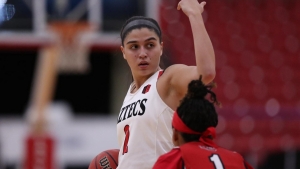 Sophia Ramos, who played all 40 minutes, notched her fifth career double-double, finishing with a game-high 22 points and 12 rebounds. She also led the Aztecs with four assists and three blocks. Téa Adams finished with 10 points on 4-for-6 shooting and Mercedes Staples had nine points and five rebounds.

The Aztecs never trailed in the first three quarters and led by as much as nine points. However, SDSU went cold over the final minutes of the third quarter and allowed Lamar to go on a 12-3 run and tie the game at 42-42 entering the final quarter.

Lamar hit a three on their first possession of the fourth quarter to take their first lead of the evening 45-42, but the Aztecs responded with an 11-0 run and never relinquished the lead again.

SDSU held Lamar to 29 percent shooting from the field while shooting 44 percent themselves.

Lamar was led by Anyssia Gibbs’ 12 points. She was the Cardinal in double-digits.

Sophia Ramos joins former SDSU great Paris Johnson as the only Aztec to have at least 20 points, 10 rebounds, four assists and three blocks in a game in the Mountain West era.

The Aztecs only trailed for 30 seconds, a brief period in the opening minute of the fourth quarter.

Through two games, SDSU is holding opponents to 34 percent shooting from the field and 21 percent from three.

The Aztecs return to Viejas for their home opener Wednesday December 2 vs. California Baptist.