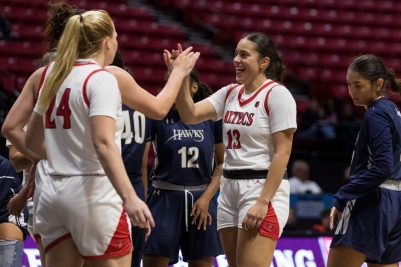 The Aztecs have won six games in a row, their longest streak since the 2012-13 season

The Aztecs forced 26 turnovers and held the Redhawks to 25 percent shooting from the field and 14 percent from three.

Yummy Morris led the Aztecs with a season-high 19 points on 7-for-9 shooting. Kim Villalobos had 14 and dished out a career-high seven assists, setting up multiple backdoor lay-ins for her teammates.

“We've been working on the post being able to deliver them to our guards,” Yummy Morris explained after the game. “Our guards were doing a really good job with the backdoor.”

The Aztecs led the whole way, beginning the game on a 21-2 run and making six of their first seven shots while forcing eight first quarter turnovers.

SDSU held Seattle to five points in each of the first two quarters and allowed the Redhawks to convert just three first half field goals.

The Aztecs would lead by as much as 37 points late in the third quarter following a 16-4 run.

SDSU finished with 50 points in the paint and committed just nine turnovers.

Eight Aztecs played between 20-30 minutes with all eight of them scoring.

During SDSU’s six-game win streak they are holding opponents to 42.3 points and have an average margin of victory of 30.3 points.

“It's only up for here. We’re going to get in the gym and keep getting better and work towards beating our next opponent.” Yummy Morris on what’s next for the team