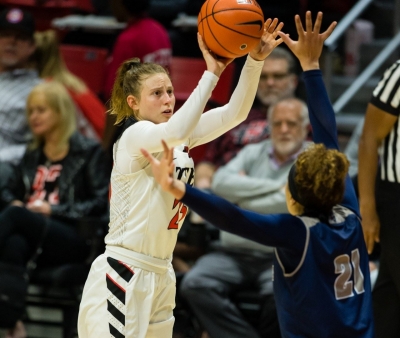 The Aztecs finish tied for fifth place in the Mountain West but will be the No. 6 seed after losing the tiebreaker to UNLV. SDSU faces the No. 11 seed Utah State Sunday at 7 p.m. PT.

“Great win tonight. We played really hard and our seniors came out and were aggressive, which I hope carries over to the tournament,” Coach Terry-Hutson said after the game. “I thought TK [Taylor Kalmer] put us on her back offensively and we did a really good job on both sides of the ball tonight for most of the game. I’m proud of their effort. They showed a lot of grit and toughness.”

Kalmer led the Aztecs with 20 points, making her first eight shots and dishing out five assists.

“The shots were just falling, thankfully,” Kalmer said after the game. “We played really well, and I think overall, we were all in a rhythm tonight. The score shows it and that was a good game for us.”

Sophia Ramos had 16 points and six assists while Zayn Dornstauder and Téa Adams chipped in 10 points each. Adams has scored in double-digits in five straight games.

The Wolf Pack began the game up 12-4 but the Aztecs then held Nevada to 1-for-11 shooting and reeled off a 12-0 run and never trailed again.

The Aztecs ended the first half on a 7-0 run and led 42-28 at the halftime break, matching their largest halftime lead of the season.

Nevada got within eight early in the third quarter only to see the Aztecs go on a 15-0 run to put the game out of reach.

The Wolf Pack began to press the Aztecs in the fourth quarter and forced turnovers but the closest they would get was 10 points.

SDSU outscored Nevada 46-25 in the second and third quarter.

“We are very confident going into the tournament because of what we were able to do last year. We're going to take it one game at a time, but they know that this tournament, in my opinion, is wide open. Everybody's kind of beat up on each other and there's been a ton of close games throughout this season. We're feeling confident but we know we need to put in the work to get it done." – Head Coach Stacie Terry-Hutson

The Aztecs averaged 1,380 fans at home this season, a new program record. SDSU has had a winning record at home in 12 of the last 14 seasons.

The Aztecs finished 9-9 in conference, tied for fifth place, their highest placing under Coach Terry-Hutson.

The Aztecs will be the No. 6 seed at the Mountain West Championship and face No. 11 Utah State Sunday at 7:00 p.m. With a win, they will move on to play No. 3 Wyoming, who knocked SDSU out in the semifinals last year, Monday at 8:30 p.m.