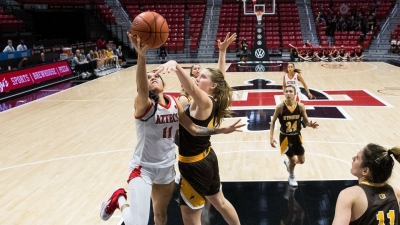 Mallory Adams had 14 points and 13 rebounds

SDSU forced six turnovers in the first seven minutes of the game and after being tied 7-7 went on a 12-0 run and held a comfortable lead for the remainder of the night.

The Aztecs led by nine at the half and then had a dominating third quarter, outscoring the Aggies 19-5.

SDSU’s lead ballooned to 30 in the fourth quarter before Utah State finished the game on a 9-0 run.

The Aztecs forced a season-high 26 turnovers which led to 26 points, and they outrebounded the Aggies 46-39 and 18-10 on the offensive glass.

SDSU got some big contributions from their bench. Meghan Fiso tied her career-high with seven points and Khylee-Jade Pepe had a career-high eight points.

Laci Hawthorne was the only Aggie in double-figures, finishing with 14 points on 6-for-9 shooting.

The Aztecs outscored the Aggies 19-5 in the third quarter

The Aztecs host Boise State Saturday at 1 p.m.  ECM Sports may have coverage of Saturday's game.  Follow @ECMagSports on Twitter for live coverage and updates.