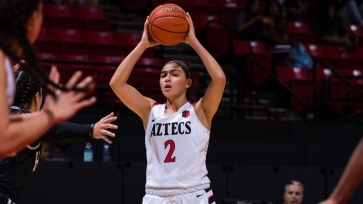 Ramos led all Aztec scorers with 14 points. Zayn Dornstauder and Mallory Adams had 13 points and Taylor Kalmer added 10 points in her first career game as an Aztec.

The Aztecs got off to a slow start and found themselves down 9-2 after the first four minutes; that would be their largest deficit of the night. A 7-0 SDSU run, which included a couple of Sophia Ramos runners, brought the score to 13-12 Hawai’i at the end of the first quarter.

SDSU never held a lead in the first half but was able to tie the game at 18-18 with 6:29 left in the second quarter.

The Rainbow Wahine held a 30-28 lead at the halftime break with SDSU ad UH shooting nearly identical from the field. SDSU shot 36 percent from the floor in the first half while Hawai’i shot 35 percent.

The Aztecs took their first lead of the night on a pair of Zayn Dornstauder free throws with 2:34 left in the third quarter. Both teams struggled to score in the final minutes of the third quarter, combining to go 2-for-15, and they went to the fourth quarter tied at 42.

Five straight points from Ramos gave SDSU a 54-51 lead with 3:08 left in the game. The Rainbow Wahine responded with a 5-0 run to retake the lead.

A Dornstauder lay-in tied the game at 56. UH then responded with a three-pointer with 29 seconds left to go back up by three. Mallory Adams scored a lay-in to bring the score to 59-58 UH with 11 seconds left.

After a pair of made free throws by Hawai’i, the Aztecs had one more shot but saw Ramos three from the right wing just miss.

SDSU committed just six turnovers but was only able to force seven. They saw Hawai’i make just six of their 31 three-point attempts but only four themselves and struggled from the free throw line (10-18).