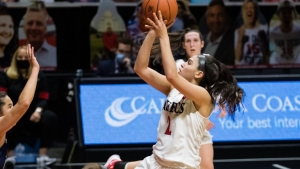 December 2, 2020 (San Diego) - The Aztec women’s basketball team (1-2) fell to California Baptist (3-0) 75-71 inside Viejas Arena Wednesday afternoon. SDSU went on an 8-0 run late in the game to pull within one but saw the Lancers’ Ane Olaeta score 10 points in the final two minutes to hold off the Aztecs.

Sophia Ramos led the Aztecs once again, finishing with 26 points, 24 of which came in the second half. Mercedes Staples nearly had a double-double with eight points and a career-high 10 rebounds.

SDSU opened up an early 6-2 lead but it didn’t last long as the Lancers went on a 12-1 run and held on to the lead until late in the third quarter after the Aztecs went on an 11-0 run.

The Lancers scored 50 points in the paint with the majority coming from Britney Thomas who finished with 26 points on 12-for-14 shooting to go with her 12 rebounds. Ane Olaeta, the preseason WAC Player of the Year, had 25 points.

California Baptist had 50 points in the paint and held SDSU to 28.

Mercedes Staples had a career-high 10 rebounds, topping the eight she had in the season opener against Washington. SDSU was +11 when Staples was on the floor.

The Aztecs will have their first true road game on Saturday when they play at San Diego at 2 p.m.